On August 26, 1920, the 19th Amendment of the United States Constitution officially granted women the right to vote. One hundred years later, many of the Black women who joined the long struggle toward this amendment have been forgotten.

As with many aspects of American political life, the suffrage movement was largely segregated, with illustrious White leaders such as Susan B. Anthony and Elizabeth Cady Stanton excluding and overshadowing African Americans. Yet Black suffragists formed their own organizations, led parades and marches, and petitioned for all women — regardless of race or ethnicity — to have the right to vote.

Nannie Helen Burroughs was a suffragist leader who gained renown for her focus on the intersectionality of race and sex. The child of formerly enslaved parents, Burroughs was a prolific activist, speaker, and educator. She served as secretary of the Woman’s National Baptist Convention — an organization at the forefront of Black women’s suffrage — and, later, its president.

In a 1915 essay, she wrote that “when the ballot is put into the hands of the American woman, the world is going to get a correct estimate of the Negro woman. It will find her a tower of strength of which poets have never sung, orators have never spoken, and scholars have never written.”

Mariah Bohanon is the senior editor of INSIGHT Into Diversity. This article ran in the March 2020 issue. 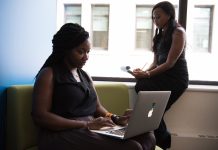