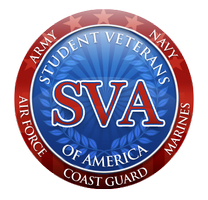 Today’s veterans face numerous obstacles in their path of attaining a college degree. These challenges range from a missing sense of camaraderie to feeling like an outsider amongst 18 year old traditional students to a lack of understanding by university faculty. When coupled with the visible and invisible wounds of war, a college degree can be an elusive goal for men and women returning from military service. Student Veterans of America (SVA) makes that goal a reality.

SVA is a 501(c)(3) coalition of student veterans groups on college campuses across the globe. These member chapters are the “boots on the ground” that help veterans reintegrate into campus life and succeed academically. Each chapter must be an officially recognized student group by their university or college and provide a peer-to-peer network for veterans who are attending the school. Additionally, chapters often coordinate campus activities, provide pre-professional networking, and generally provide a touchstone for student veterans in higher education.

Since SVA’s founding in 2008, over one million veterans have returned home to pursue a postsecondary degree or certificate using VA education benefits.  To meet this need, SVA’s presence at the local and national levels has grown to include over 1,100 chapter affiliates, numerous private and nonprofit partners,  and most importantly, an expanding list of impactful programs and services for veterans.

The nation’s renewed focus on veteran welfare has ignited change on campuses and in congress.  SVA is committed to capitalizing on this momentum to ensure today’s and tomorrow’s veterans are supported in their transition to education and employment.