Despite the great strides being made by women in healthcare professions — they now comprise the majority of incoming medical school students in 2018 — one sector of this workforce remains largely divided by gender. Nursing, one of the fastest growing professions in the U.S., is still the realm of women: in 1960, only 2 percent of nurses were male — nearly 60 years later, that number has risen to just 13 percent, according to the Washington Center for Equitable Growth.

The majority of male nurses — 70 percent — say that gender stereotypes are the number one barrier to more men entering the field, according to a study sponsored by the American Association for Men in Nursing (AAMN).

“Many times, people have a misconception of what nursing really is,” says Blake Smith, president of AAMN. “It’s a skillset that’s not unique to a certain gender, and it’s up to us [as nurses] to promote that.”

In order to encourage more men to join the profession, the group conducts outreach such as the AAMN Engaging the Future RN campaign, which challenges local chapters to reach as many male middle and high school students as possible through classroom presentations, career fairs, and more. “It’s really about awareness,” Smith says of these visits. “For many men, [nursing] is just never an option because their high school counselors, parents, and family members don’t talk about it as a possibility.”

AAMN also supports higher education by enlisting members to guest lecture at nursing schools. As only 6 percent of nursing faculty are men, according to the National League for Nursing, this can have a powerful effect on male students who may feel isolated, says Smith.

“Just seeing a male being successful in nursing, even though it seems like something so small, can really trigger a sense of belonging,” he says.

For Justin Waryold, DNP, assistant professor and director of the Advanced Practice Nursing Program in Adult Health at Stony Brook University School of Nursing (SBU SON), bringing more men into the profession is about dispelling preconceived ideas. “A lot of my efforts are to take the stigma out of being a man in nursing by showing what we actually do,” says Waryold. “We’re nurse practitioners, we work in critical care, in emergency rooms, or in case management.”

One way to illustrate this point is through the weekly health screenings that SBU SON hosts at the university’s Student Activities Center. When male students come in for services.— such as blood pressure screenings, nutritional counseling, or mental health assessments — it gives Waryold a chance to engage with them. “Very often they will see me in a lab coat, shirt, and tie and assume I am a physician,” he says. “I’ll correct them and then explain why I went into nursing and why it’s important that more men go into this field.”

Like Smith, Waryold recognizes that one of the greatest gaps is in academia. “I’d like to think that I’ve done a decent job of getting men into advanced practice nursing,” he says of his two decades in the field. “But I still struggle to try to get them into academics and to adjust the academic climate of nursing.”

Most of the ones who decide to become educators do so after working in the field five or more years, he says. “They’re already in love with nursing and are sold on the profession, but want to know what else is out there,” Waryold explains. For those considering academia, he lets them observe his teaching practice and meets with them on a regular basis to consult on career options.

He also helps male nurses considering a second career in education to see the parallels between the professions. “I explain to them how rewarding teaching is — I get the same [feeling] hanging up an emergency drip for a patient in need as I do teaching a student,” Waryold says.

Edward Bennett, a recent graduate of the Frances Payne Bolton School of Nursing at Case Western Reserve University, has been criticized for his career choice. “I’ve definitely gotten pushback for being a black male nurse,” says Bennett, who was named 2018 Student Nurse of the Year by the National Black Nurses Association. “Other people look at me like ‘Why would you want to be a nurse when you can be a doctor?’”

Throughout his time as a student, Bennett was an advocate for changing misconceptions about the profession. For instance, he says, being a nurse includes many of the same aspects that men look for in stereotypical masculine careers. “You work with your hands, you think critically, and you advocate for your patients every day,” he says.

Bennett thinks nursing schools could do more to recruit men, especially those who are underrepresented, such as men of color. Creating pipeline programs for male students at predominantly African American high schools, he suggests, could be a key method for diversifying the profession. Furthermore, growing the number of men of color in this occupation would not only help remedy the nursing shortage, but help combat health disparities on a broad scale, says Bennett.

“Nursing as a field represents the largest group of public health advocates in the country — there are millions of us,” he says. “By pushing for people to see issues like police violence against African American men from a public health perspective, we could really make a difference policy-wise and […] on a local level.”

Furthermore, male nurses can be powerful advocates in combating what the World Health Organization refers to as the “men’s health gap.” Numerous studies have found that men visit the doctor far less frequently than women and are less likely to ask questions or bring up concerns during medical appointments. Having access to a male nurse can help them open up, says Smith. “Men tend to feel much more comfortable being vulnerable in a closed-door setting with another male, when they know they are not being judged and can actually share their thoughts,” he says, adding that improving health disparities for men is central to AAMN’s mission.

And while there are plenty of men in medicine, patients are more prone to open up to nurses in general, Smith says.— pointing out that Gallup has ranked nurses as the most trusted professionals in the U.S. for three consecutive years.

“[Nurses] are very trusted and respected, but at the same time, there’s still misunderstanding about who we are and what we do,” he says. “If we can get past those barriers, we can not only diversify the workforce but much more easily make up the shortages that exist in the profession.”●

Mariah Bohanon is the associate editor of INSIGHT Into Diversity. 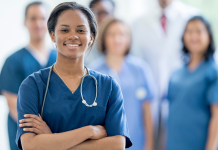 Institutions Innovate to Fill the National Shortage of Nurse Educators