INSIGHT Into Diversity is pleased to welcome Venessa Brown, PhD, as the newest member of the magazine’s Editorial Board. Brown currently serves as the inaugural associate athletic director for diversity, equity, and inclusion and chief diversity officer for Intercollegiate Athletics at Southern Illinois University Edwardsville (SIUE).

Brown formerly served as SIUE’s associate chancellor for the Office of Institutional Diversity and Inclusion and chief diversity officer. Brown holds a tenured faculty appointment as professor in the Department of Social Work and previously served as associate provost in academic affairs and executive director of the SIUE East Saint Louis Center (ESLC).

Before serving at SIUE, Brown began her academic career in 1993 as an assistant professor of sociology and social work in the Department of Social Sciences at Greenville College. Following her commitment to accredited social work programs, Brown accepted a position at SIUE in 1995 as an assistant professor to start the Master of Social Work (MSW) program. She was tenured and promoted in 2001, made full professor in 2006, and department chair from 2006 to 2007. In that role, she contributed to the overall success of the BSW/MSW program being fully accredited.

Brown is a native of Missouri. She earned a bachelor’s degree in social work and psychology at Greenville College in 1983, an MSW from Atlanta University School of Social Work in 1985, and a PhD in social work with a concentration in statistics and computer science from Clark Atlanta University in 1994. After attending her master’s program, she worked for the State of Georgia as a child welfare investigator. She is a member of Delta Sigma Theta Sorority, Inc.

Brown is nationally and internationally known for her commitment to public child welfare. Her expertise is in the area of child sexual abuse, and she has also been recognized for teaching and international activities. She has worked with the juvenile court and superior courts on behalf of children. Her past students have become leaders in the region. In addition to publishing articles and book chapters, she is the lead author of A Promising Reality: Race, Culture and Gender in Cuba and Child Welfare Case Studies. Browns’s forthcoming project is a textbook, Community-Based Child Welfare Practice with Multicultural Families.

Over the years, Brown has been a principal investigator on state and federally funded grants. Under her leadership as the executive director of the SIUE ESLC, she oversaw grant-funded programs totaling approximately $15 million. She also secured a $1 million cash gift to the university to open a state-of-the-art STEM technology lab for the SIUE East St. Louis Charter High School. In 2018, she was instrumental in securing an additional $3.7 million cash gift to continue STEM education for the Charter High School. Brown’s current research focus is on mentoring, diversity and inclusion, child welfare history inclusive of people of color, and international child welfare. 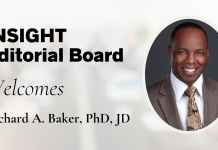 INSIGHT Welcomes Richard A. Baker to Editorial Board 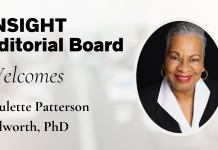 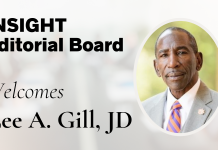 INSIGHT Welcomes Lee A. Gill as New Editorial Board Member