Our executive search company works almost exclusively for higher education, so when a big player in the field goes belly up, it’s major. That recently happened with the Corinthian institutions, which were announcing closures from one day to the next. Tens of thousands of students were displaced, and the financial ramifications were massive.

As a recruiter, my first thought turned to the folks who found out on Sunday that there was no need to report to work on Monday. Many of them had been employed at other institutions before they became part of the proprietary juggernaut that was Corinthian, and some of them had joined the system voluntarily, because proprietary education seemed to be on the rise, the wave of the future, and a solid segment within which to build a career. Either way, there are now thousands of people with decent experience — people who never had a single thing to do with the problems that led to Corinthian’s demise — who are now signing up for unemployment benefits.

So, what do you do when the career choice you made turns out to have been a really bad one?

First, get your head out of the sand. There are usually signs and symptoms that an organization or institution is headed for trouble. When you see the signs, or when you start to have the uneasy gut feeling that something bad is brewing, do whatever is in your power to solve the problem. But be realistic. If you cannot fix it and no one else is going to, you need to start making plans. Pretending everything is fine, or will be fine, isn’t going to make it so. You need to take care of yourself.

Look critically at your options. Are you in a field, and in a geographic region, in which you can likely change employers without relocating? Identify the potential for other employment both locally and as far afield as you and your family are comfortable with. This is a tough process and sometimes calls for some difficult conversations. If you are in a specialized field, the process can be particularly wrenching because there may be fewer nearby opportunities. This is not something you want to undertake after your employer has crashed and burned. Do yourself and your loved ones a favor and anticipate the possible need for a move before it becomes an immediate and critical issue.

Consider how saleable you are. Have you kept up with current trends in your field?  If not, do what you can to update your skill and knowledge base. Learn new techniques or technologies, identify and familiarize yourself with the direction your field is taking, and read up on where experts think it might be headed next. If you are on the market, you will be going up against people who know all the latest information, so your selling point needs to be, “I know it, too, plus I have great experience!”

Decide if you have crossover skills that open other avenues for employment. I spent decades in human services before coming into the recruitment field, and I would never have guessed that the human service skills I learned from interviewing, organizational analysis, and strategic planning would serve me well in this role for more than 15 years. If you don’t think you can find acceptable employment in your own field, take a step to the side and see where your knowledge and heart can take you. You might be surprised.

Build your network. Most new jobs come to individuals because of someone they know personally. It pays to know more people in your field or in peripheral fields, and if things do go badly, it’s great to have friends who understand and will offer a shoulder to cry on. Don’t overlook people like me. Build relationships with recruiters who serve your field.

And, finally, if the worst happens and your job evaporates out from under you, keep your wits about you. Before the lights go out, try to get written statements of support from colleagues and supervisors — specifically statements that isolate you from the issues that caused the problems. For example, if financial mismanagement caused the crash and burn, get a statement from your supervisor that you were a professor, or an HVAC maintenance person, and had no responsibility for institutional finance. At the same time, get commitments from people who can serve as good references for potential employers, and make sure you can contact them if needed. Also, get copies of your work evaluations and anything else human resources can give you that could support a job application. It’s best if you don’t need this kind of thing to get a new job, but if you do and don’t have it, it’s tough to get after everyone has scattered to the four corners of the universe.

Nostradamus aside, there’s no predicting the future. However, if you are willing to look reality in the face, you can sometimes gain enough time to unhitch your wagon before the star you are riding on burns out and takes you with it.●

Vicky Ayers is the senior director for executive recruitment at RPA Inc. She is also a member of the INSIGHT Into Diversity Editorial Board. If you have a question, email her at vayers@rpainc.org. 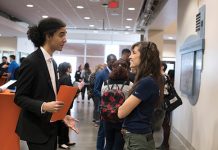