Another year, another commemoration of Asian Pacific American Heritage Month. But why is it important to celebrate the history of diverse communities in the U.S.? This quote from the national hero of the Philippines — journalist, poet, activist, and physician José Rizal — provides a compelling answer: “No history, no self.  Know history, know self.”

Given most people’s limited knowledge of the history of the fastest growing racial group in the U.S., this quote has particular significance for Asian Americans, defined by the U.S. Census Bureau as anyone having origins in East Asia, Southeast Asia, and South Asia.

Across campuses, companies, and communities, Asian Pacific American Heritage Month celebrations — most often consisting of cultural performances and ethnic food tastings — have become part of the diversity and inclusion calendar norm. Yet fashion shows, lion dances, and a smorgasbord of chow mein, pancit, samosas, and kalbi provide only narrow insight into Asian Americans, and certainly not enough to enable organizations to lead, manage, and engage these high-potential individuals.

One way of gaining greater insight into this highly diverse employee and student base is to understand the five major waves of immigration that brought them, as well as their parents, families, and ancestors, to the United States.

The first major wave began in the mid- to late 1800s, when Chinese immigrants, along with thousands of other groups from around the world, were drawn to Northern California for the Gold Rush. Later, a large number of Asian immigrants — first the Chinese, followed by the Japanese, Filipinos, Koreans, and Indians — came as inexpensive sources of labor to work on the Transcontinental Railroad, on plantations and farms, in canneries, and in other industries, such as mining and textiles. Two notable policies enacted during this time had long-lasting effects on later generations:

The 1882 Chinese Exclusion Act, which suspended Chinese immigration for over 60 years and rendered this population ineligible for naturalized citizenship. The Chinese are, to date, the only people to have been legally excluded by the United States.

The 1942 signing of Executive Order 9066, which placed Japanese Americans into 10 internment camps. Two-thirds of those interned were U.S.-born citizens, and seven out of the 10 rights in the Bill of Rights were violated. The last internment camp was closed in 1946.

The second major wave of Asian immigration began with the passage of the 1965 Immigration and Nationality Act, which allowed equal immigration quotas from Asia, Europe, and Latin America and gave preference to family reunification. It also created a demarcation in the makeup of the Asian American population from the first wave, as many of the immigrants from Asia during this second wave were skilled professionals. It was this second wave that gave rise to the current and persistent “model minority myth.” The fall of Saigon in 1975 signaled the beginning of the third major wave of Asian migration to the U.S. Rising political unrest throughout Southeast Asia forced thousands of Cambodians, Hmong, Laotians, and Vietnamese to flee their homelands and resettle in the U.S. Over 700,000 refugees are estimated to have permanently moved to the U.S. between 1975 and 1985. The early refugees from Vietnam were military personnel and urban, well-educated professionals associated with the U.S. military or the South Vietnamese government. A later wave of Vietnamese refugees, commonly known as “boat people,” were farmers from rural areas and were typically less educated.

Beginning in the late 1970s and early 1980s, the fourth major wave of immigration followed the end of the Chinese cultural revolution in 1976, after which mainland Chinese students were encouraged and allowed to travel abroad for foreign university education degrees. Many of the students who attended universities in the U.S. remained here to work or to continue studying and doing research. Following the effects of the earlier Chinese Exclusion Act, this rapid growth reshaped and revitalized the Chinese community in the U.S.

The dot-com boom of the late 1990s and 2000s spurred the current and most recent wave of immigration. The demand for skilled technical professionals, which remains unabated, brought in new immigrants on H1B work visas from across the globe, particularly from China and India. The growth has been so exponential that the Asian-Indian population grew from being the fifth largest Asian ethnic group in the 1990 census to the third largest in 2010.

Depending on when a student, employee, or their family members moved to the United States, their values and perspectives on issues are likely to vary. They are likely to have been shaped by their immigration generation in the U.S., or for first-generation immigrants, their past experiences in their home countries — even if they are the same ethnicity.

While a historical view of the generational diversity of Asian American immigrants is just one aspect of the population’s heritage, this insight can be used to better lead, teach, and engage these high-potential employees and students.● 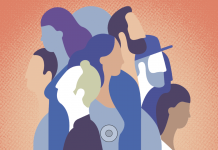