Despite concerns over the potential effects of President Donald Trump’s travel ban on higher education, international students have continued to express interest in studying in the U.S., according to a study released last week by the Institute of International Education (IIE).

The study, titled Shifting Tides: Understanding International Student Yield for Fall 2017, gathered data and responses from admissions officers at 112 institutions nationwide. Findings revealed only a 2 percent decline in this year’s expected yield rate for international students compared to last year; yield rate is the percentage of students who attend a school after being offered admission. From fall 2016 to fall 2017, yield for undergraduate international students across all responding institutions dropped from 26 to 24 percent. Researchers say this minimal decline is similar to changes in the yield schools reported for domestic students, which decreased from 30 to 28 percent during the same year.

Although Trump’s travel ban has experienced its fair share of hurdles and still has yet to be fully implemented, many in higher education have expressed deep concerns about the effect such a measure might have on international students coming to the U.S. Some have feared that fewer students will decide to study here because of either being physically barred or feeling unwelcome and unsafe coming here. Although IIE’s study was conducted in May — prior to the U.S. Supreme Court allowing a limited version of the travel ban to take effect, which exempts college students and faculty — it indicates that efforts to bar individuals from six Muslim-majority nations has had little effect on international students’ study decisions.

“The situation is not as dire as what had been predicted,” Rajika Bhandari, PhD, deputy vice president for research and evaluation at IIE, told The Washington Post. “The entire calendar year has been marked by a great deal of anxiety and concern, as well as speculation, in the higher education sector about whether everything happening nationally may have a significant negative impact on international student enrollment this fall.”

While some institutions and states — like Texas — have experienced more variations in international enrollment than others, most are cautiously optimistic that incoming student enrollment will not be affected as much as they initially thought. Additionally, some colleges and universities reported increasing outreach efforts to international students to counteract any negative effects of the travel ban.

More than one million international students are currently attending higher education institutions in the United States, contributing over $36 billion to the economy. 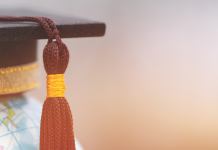