In three separate incidents, nooses were discovered hanging on the campuses of American University (AU), Kansas State University, and the University of Maryland last week. The incidents prompted outrage and protests by students, and are being investigated as hate crimes by campus and state police and, in the case of AU, the FBI.

On Monday May 10, bananas hanging from nooses were found at three locations on AU’s campus in Washington, D.C. Written on the bananas were the letters “AKA” — a common abbreviation for Alpha Kappa Alpha, a historically African American sorority — as well as the words “Harambe bait,” referring to Harambe the gorilla who was shot and killed last year at the Cincinnati Zoo. Many claim the nooses are a threat directed at Taylor Dumpson, a member of AKA who began her tenure as AU’s student body president — the first black woman to hold the position — on the day the nooses were discovered.

In response, AU students held demonstrations and threatened to withdraw from the university en masse if school officials did not address the incident and the threatening message it sends to Dumpson and other African Americans on campus. Last fall, bananas were used to taunt black female students on two separate occasions. One student reported to police that someone had thrown a banana at her while walking on campus, while another reported finding a rotten banana and racist messages outside of her dorm room. It is unclear if the incidents are related, and the perpetrator in both cases was never caught.

On Thursday, Dumpson, AKA officials, and members of Congress who are AKA alumni held a press conference on Capitol Hill in which they called for a federal civil rights investigation and for the U.S. Departments of Education and Justice and President Donald Trump to take action. Later that day, the FBI announced it was investigating the incident as a hate crime.

That same day, a noose was found hanging in the Phi Kappa Tau (PKT) fraternity house on the University of Maryland’s (UMD) campus, less than 10 miles from AU. Members reported the noose to campus police and expressed outrage and disbelief at the discovery. UMD Director of Fraternity and Sorority Life Matt Supple said in a statement that PKT is committed to safety and equality “for the many men of color in their membership.”

The incident does not bode well for fraternities at UMD, which were the target of student protests two years ago after an email encouraging fraternity members to discriminate against women of color and commit sexual assault was leaked to the public, according to the Washington Post.

A day after the incident at UMD, a noose was discovered hanging from a tree near a busy walkway on the campus of Kansas State University (KSU). The noose was quickly reported to the Office of Institutional Equity and removed by campus police, who are investigating the incident along with Kansas state police.

KSU has experienced other recent incidents as well, including anti-Semitic signage placed on campus during the school’s Holocaust Remembrance Day on April 24, and last fall, the university received national attention when two students posted photos of themselves in blackface on the school’s website.

The presidents of AU, UMD, and KSU have each issued official statements pledging to identify the individuals who are responsible for the noose incidents on their respective campuses and condemning the acts as hate crimes. 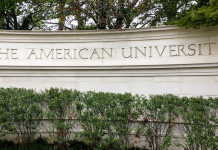