White supremacist propaganda continues to be a growing problem in higher education, with more incidents occurring on college campuses in spring 2019 than in any previous semester, according to a new report by ADL.

The 2018-2019 school year marks the third year in a row that reports of White nationalist propaganda have increased at U.S. colleges and universities.

There were 161 reported instances of “alt-right” fliers and other extremist messaging on college campuses from January through May 2019, according to ADL, formerly known as the Anti-Defamation League. More than 300 such instances were recorded for the entire school year, representing a 7 percent increase from 2017-2018 when reports of White supremacist propaganda on college campuses spiked by 77 percent.

A majority of the posters, stickers, and other recruitment materials at colleges and universities in the 2018-2019 school year came from “alt-right” groups, with the American Identity Movement (AIM) being the most common, the report states. AIM, which until recently was known as Identity Evropa, and similar groups target White students through messages that range from “deceptively promot[ing] ‘American Identity’” to explicit racism, according to ADL.

The more explicit recruitment materials found on campuses this past year contain images and messages that denigrate non-White groups, immigrants, and people who are LGBTQ, Jewish, or Muslim. The messages reflect the disturbing rise of hate crimes against these groups in the United States more broadly as well as a global rise in White supremacy.

ADL CEO and National Director Jonathan Greenblatt stated in a press release that higher education leaders must be prepared to “fight back against this scourge of hate targeting our youth.”

The organization offers free resources such as the Hate/Uncycled program and pre-recorded webinars to help colleges, law enforcement, and students know how to prevent and respond to instances of hate on campus. 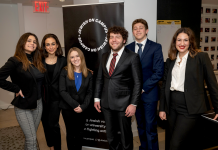