College tuition and fees have increased 63 percent over the past 10 years, according to the U.S. Bureau of Labor Statistics. With this steady rise — a trend that’s likely to continue — it makes sense that college students would want to complete their degrees more quickly to avoid incurring extra debt.

Finishing in four years, however, is not always possible. Internships, co-op programs, five-year programs, the unavailability of required courses in certain semesters, and changing majors.— which may call for additional core subjects — are all common reasons a student may need more than four years to graduate.

Although graduating in four years may lower overall higher education costs, for those students who could benefit the most from a shorter time to completion, getting their degree in this time frame can be nearly impossible. Those who are paying tuition and fees with loans, grants, and income from part-time jobs may need to put their studies on hold for a semester or more to work full time or to transfer to a less expensive community college, which ends up lengthening their time to graduation.

Despite the barriers to graduation many students face, the University of Notre Dame and Wesleyan University have routinely been recognized for their high four-year graduation rates. A number of programs at both schools are in place to support students.— particularly those who are first-generation and minority — and keep them on track to graduate within this time frame.

Wesleyan’s 87 percent four-year and 91 percent six-year graduation rates can be attributed to programs that create a sense of community for all students, says Joyce Jacobsen, PhD, provost and vice president of academic affairs. “About one-third of our students are on athletic teams, and we saw that belonging to a team translated to high graduation rates, as well as high satisfaction with the college experience.”

This concept was used to develop an initiative targeted to first-generation students. A pre-orientation program for these individuals at Wesleyan gives them a chance to meet each other and learn about resources on campus. They also attend the general orientation program, but the additional opportunity to identify with other first-generation students helps them feel less isolated, explains Jacobsen.

Because of its focus on first-generation students — many of whom are also from low-income or underserved communities — Wesleyan’s efforts have resulted in four-year graduation rates of 86 percent and 90 percent for Hispanic and African American students, respectively, as well as 87 percent for Pell Grant recipients.

Notre Dame’s 91 percent four-year graduation rate and 95 percent six-year rate can be attributed to a focus on first-year students, as well as retention between students’ first and second years; the retention rate for the most recent cohort is 98 percent, says Hugh Page, PhD, vice president and associate provost for undergraduate affairs at Notre Dame. “Our First Year of Studies program includes all entering freshmen and is designed to help them adjust to college life and stay on track throughout their four years,” he says.

Advisers are assigned to small groups of students, who are expected to attend two group meetings and at least two individual meetings with him or her during the first year. “The adviser serves as an institutional guide to help students learn about resources and make decisions about their majors while taking the first-year courses,” says Page. Grades are monitored, especially around mid-semester, which serves as an early warning system in case intervention is needed.

Acknowledging the role that finances can play in students’ ability to graduate in four or six years, Notre Dame created the Fighting Irish Initiative two years ago. “[The program] offers financial and other support services to low-income students; small loans that pay for tutoring or an extra trip home to see family can make a big difference,” Page says, adding that the initiative also includes a team to discuss issues students are facing.

Georgia State University’s (GSU) student population is 65 percent non-white and 60 percent low-income, meaning they often experience greater barriers to graduation, says Tim Renick, PhD, vice provost and vice president for enrollment management and student success at GSU. Despite these challenges, the university has doubled its four-year graduation rate over the past 12 years — it’s now at 27 percent — and increased its six-year graduation rate by 22 percent over 12 years, to 54 percent.

“Graduating in four years is difficult for many of our students because 80 percent of our undergraduates are working to support themselves or families, and many are working full time,” says Renick. “We realized that we don’t have control over the economic life of our students, so we [examined] the role we play in extending their time in school, which adds to their debt.”

After evaluating student data, Renick and his team discovered 800 different course registration mistakes students had made that put them at risk for delayed graduation — primarily, signing up for the wrong ones. “We offer 90 majors and 3,000 courses, so it is easy for students to sign up for those that won’t apply to their major or to take courses in the wrong sequence,” he says.

This discovery led GSU to develop an analytics platform that evaluates student registration records every semester to identify those who have registered incorrectly. Staff then follow up with them by phone, prior to the start of classes, to help redirect them. Since the university implemented this program five years ago, the six-year graduation rate has increased 6 percent, and Renick estimates that students are averaging one-half semester less time to graduate.

GSU also created Panther Retention Grants five years ago to support seniors. “At this point in their education, their eligibility for Pell Grants or the State of Georgia’s HOPE funds may have expired, so they are tempted to drop out to work full time,” says Renick.

He says that incoming seniors often don’t realize they won’t have funds available to cover tuition until after they’ve registered. To remedy this problem, Renick and his staff identify those who no longer qualify for other funding and are within two semesters of graduation. Panther Grant funds are then deposited into those students’ accounts, and a staff member calls to inform them that their tuition and fees for the semester have been covered. The student must then follow up with the Office for Advisement.

“Students must come into our office so that we can plot an effective track to graduation and so they can meet with a financial counselor,” Renick says. More than 8,000 grants averaging $900 have been awarded since the program’s inception, and 70 percent of Panther Grant recipients graduate within two semesters, he adds.

The Ohio State University’s (OSU) retention efforts include reaching out to first-generation, low-income students before they even get to college — sometimes as early as eighth grade. The university’s Young Scholars program is designed for first-generation students who expect to receive no financial support from family members. Students in nine urban school districts in Ohio apply for the program, and 125 are accepted each year. Success coaches work with them to explain how to get into college, offer advice on what courses to take, teach time-management and study skills, and prepare them for entry into college.

“Once they are on campus, our Young Scholars attend a bridge program — a three-week course prior to the start of classes.— at which they take a few noncredit courses to acclimate them to the campus and [prepare them for] college classes,” says Rochelle Woods, director of the program.

“We also offer support services such as tutoring, study skills classes, and supplemental instruction — along with advising — all in one place,” adds Armada Henderson, Young Scholars program manager.

The combination of these services, along with the academic advisers, success coaches, and program alumni mentors, is proving effective; the six-year graduation rate for students in the program is 72 percent, according to Henderson.

The advising program at Cleveland State University (CSU) is also a strategic effort to move students closer to a four-year graduation. Merit-based scholarships that are dependent on a workload of 30 credit hours in a calendar year and the establishment of a freshman advising program that is “intrusive” have resulted in increases in retention and graduation rates, says Peter Meiksins, PhD, vice provost for academic programs at CSU.

While CSU’s graduation rates — the most recent of which are for the cohort that entered as freshmen in 2009 — are 22 percent for four years and 40 percent for six years, they are continuing to improve. In fact, 39.8 percent of students admitted in fall 2015 are on track for a four-year graduation after their first year, compared with only 27.3 percent of the fall 2014 cohort following their freshman year.

These pathways not only shorten time to completion, but also give students an accurate idea of when they will graduate, which Meiksins believes can increase confidence and motivation.

Although many factors affect a student’s ability to graduate in four years, Meiksins says it’s possible for the majority to move closer to this goal.— but it does require a change in perspective and behavior.

“There is a tendency not to push low-income or underserved students to take a full course load because they may not have the same academic preparation as others,” he says, “but that approach backfires and just puts them further behind. We need to encourage students to take 15 hours a semester and then provide the monitoring, advising, and support they need to succeed.”● 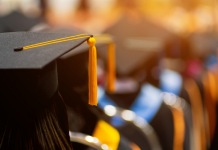 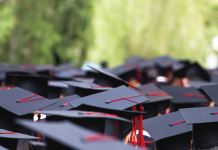