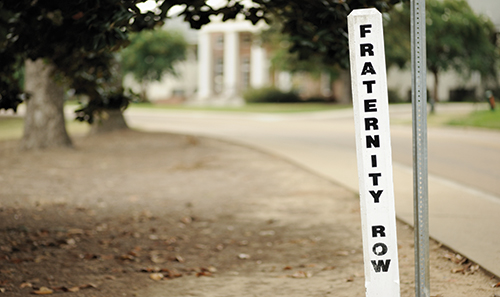 Fraternities and sororities have long faced criticism for perpetuating a culture of exclusion, sexism, hazing, and substance abuse. The backlash against these organizations has intensified in recent years due to a growing number of high-profile incidents of discrimination against underrepresented races and ethnicities, sexual assault, and multiple deaths as a result of alcohol abuse and violent hazing rituals.

Now, some students are calling for an end to Greek life on college campuses all together.

“The system is broken. We cannot adequately reform Greek life. We must abolish it,” states a Change.org petition created by the Abolish Greek Life movement, which is made up largely of former fraternity and sorority members who have left their organizations in protest of what they say is the toxic and bigoted nature of historically White fraternities and sororities (HWFS). Members include students from Duke University, Emory University, Northwestern University, Tufts University, and more.

Many students, both inside and outside Interfraternity Council and Panhellenic (IFCPH) chapters, have experienced incidences of racism, misogyny, classism, homophobia, transphobia, ableism, and sexual assault due to systemic oppression within HWFS, according to the group.

“IFCPH is more likely to attract non-working class, White, and higher-income students; it also sustains a cycle of privilege in which White students are more likely to gain professional opportunities than their non-White peers: 76 percent of U.S. Senators, 85 percent of Fortune 500 executives, and 85 percent of Supreme Court justices since 1910 have been alumni of fraternities and sororities,” the Change.org petition states.

The authors of the petition also state that even those Greek organizations that have diverse memberships are “still part of a system that is deeply misogynistic, racist, and classist.” 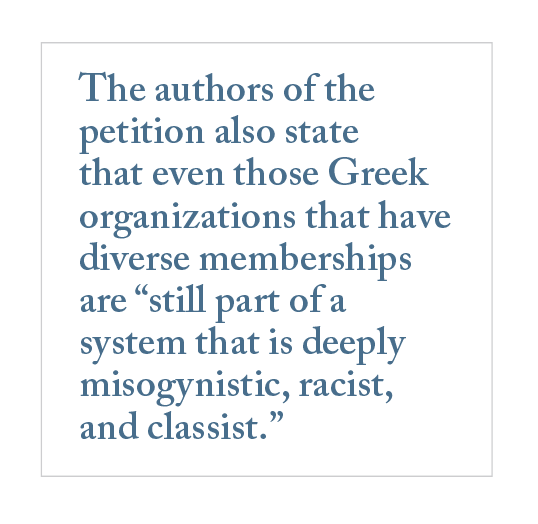 The largest exodus from Greek life thus far has been at Vanderbilt University (VU), where hundreds of students withdrew from their fraternities and sororities in July after a video of a Greek community member using a racial slur was posted on social media. Greek life has traditionally been a staple in VU culture, with more than 35 percent of undergraduates belonging to such an organization, according to the university’s website. A 2019 report by the VU student newspaper, however, found that demographic changes to the student body have contributed to a recent decrease in participation. The report found that fraternity and sorority recruitment experienced a 20-year low in 2019.

Some colleges and universities have already taken steps to temporarily disband specific fraternities and sororities or to reform the culture of such organizations. Penn State University took measures to shutter and reform Greek life on its campus after a 19-year-old student, Timothy Piazza, died during an alcohol-related hazing event for the Beta Theta Pi fraternity in 2017. The university responded to the tragedy by suspending some fraternities and implementing stricter regulations for alcohol-related events, including limiting the number of parties that Greek organizations are allowed to host annually and requiring that alcohol be served at such events only by state-certified bartenders. In 2019, it formed the Timothy J. Piazza Center for Fraternity and Sorority Research and Reform, a multidisciplinary research center dedicated to supporting positive educational outcomes, student safety, and the reduction of high-risk behaviors.

More recently, the University of Northern Colorado in February banned all Greek organizations from participating in university-sanctioned activities following multiple reports of alcohol and substance abuse, sexual misconduct, and physical violence. In response, the North American Interfraternity Conference (NIC) condemned the ban, stating on its website that implementing “blanket community actions disincentivize[s] following the rules and taking care of each other since responsible students are treated just like their peers causing problems. Additionally, blanket actions erode trust between campus partners and students, alumni, and inter/national organizations, because these actions come off as unilateral, lacking basic principles of due process.”

The NIC, which represents 58 nationwide fraternities, has also announced that it is launching an initiative to support diversity, equity, and inclusion among its fraternities by creating and enhancing diversity resources, partnering with other councils and associations, and hosting digital discussions on racism.

Greek Life and the Spread of COVID-19
Greek life has most recently been connected to the spread of the coronavirus on college campuses due to close living quarters, recruitment events, and “super spreader” parties where multiple students convene without taking social distancing precautions or wearing masks.

By mid-August, The New York Times had identified at least 251 cases of the virus tied to fraternities and sororities across the U.S. At the University of Washington, at least 165 of the 290 cases identified by the school were associated with its Greek life community, according to The New York Times. The local IFC chapter has responded by prohibiting social events and gatherings for the remainder of the 2020 calendar year. At the University of California, Berkeley, 47 cases were identified in a single week in early July, most of which were connected to the Greek system.

More than 160 University of Mississippi students tested positive for COVID-19 in June, with outbreaks reportedly linked to Greek rush parties, according to U.S. News & World Report.

As of mid-September, reports of super spreader parties hosted by fraternities and sororities at institutions across the U.S. have continued to rise, leading colleges to take further action by banning or taking punitive measures against these organizations and thus raising more concerns about their future within the higher education system.●

Mariah Stewart is a senior staff writer for INSIGHT Into Diversity. This article was published in our October 2020 issue. 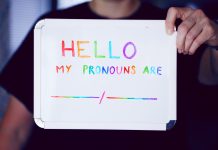 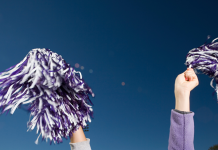 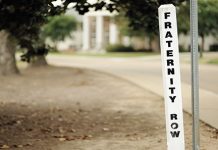