Last week the Dean of Harvard Law School, Martha Minow, endorsed a proposal to change the school’s official shield. The initial idea of eliminating the seal on the shield was just one demand made by a student activist group calling itself Reclaim Harvard Law School.

The shield features the crest of Isaac Royall — three sheaths of wheat on a blue background. Royall was a plantation owner, slave trader, and justice of the peace from Antigua whose contribution of land helped establish the school. The shield was adopted by Harvard in 1936 to commemorate the university’s 300th birthday, but many on campus oppose the legacy of the Royall family and its ties to slavery.

Reclaim Harvard Law School induced a wave of on-campus activism last fall. Though the group is pleased with the dean’s approval to change the shield, they say it is not enough to make the difference they have set out to achieve.

Their list of demands include changing the Harvard Law curriculum and faculty, having new committees and offices that address diversity and inclusion, and making the school more affordable for disadvantaged students.

Dean of Students Marcia Sells said school officials have been fair in addressing the demands.

“The reality is many of [the demands] are things that students have been talking about for a while,” Sells said. “So we’re not looking at it from the context that ‘we have to respond to demands,’ but we are looking at, here are the things we have been doing.”

Dean Sells said the school hired a Director for Community Engagement and Equity, is strengthening its diversity training, and is conducting a study of the climate on campus, among other things that apply to the demands.

Keaton Allen-Gessesse, a member of Reclaim Harvard Law School, said the demands made by the group are important for the administration to follow.

“We’ve been asking for critical race theorists to come here and to be a part of the faculty, and those calls have gone ignored,” Allen-Gessesse said.

In response, Reclaim — along with dozens of other student — have occupied the student center. They have invited guest speakers and provided sleeping bags and chairs for the demonstrators to camp out.

Some students disagree with Reclaim’s tactics, however. Third-year law student Sarah Gitlin said the group is going about their message the wrong way.

“Instead of working with the administration, Reclaim has been fighting them, has been creating a really antagonistic environment,” she said. “And so I think that a lot of students who are uncomfortable with certain portions of Reclaim are genuinely afraid to speak out about it, and at a law school that’s devoted to a marketplace of ideas that’s a real shame.”

Reclaim Harvard Law School said they will continue to occupy the student center until their demands are met. Dean Sells said the administration has no intention of kicking them out. 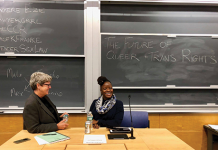