According to a recent study conducted by the College and University Professional Association (CUPA), women who work in student affairs tend to enjoy more equitable career opportunities than those who work in other areas of higher education. Notably, 71 percent of student affairs leadership positions are held by women, as opposed to 58 percent of such positions in higher education more broadly.

The report also found that the student affairs field offers more equitable pay across gender than other administrative positions at colleges and universities. White women in lower-level roles made approximately 96 cents for every dollar paid to their male counterparts. For directors and others in top leadership positions, the wage gap was slightly wider, with Caucasian women making approximately 91 cents for every dollar earned by high-ranking white men. The racial wage gap for student affairs employees was also narrower than in other fields, with African American men and women earning 97 cents and 94 cents, respectively, for every dollar paid to Caucasian male employees.

CUPA researchers also compared the demographics of student affairs professionals with that of college students. They found that the number of African American student affairs employees is representative of the number of African American students at U.S. colleges and universities. However, other racial groups do not adequately reflect student demographics. Only 8 percent of student services employees are Latino and approximately 3 percent are Asian American, compared to 17 percent of college students who are Latino and 6 percent who are Asian American.

According to the National Center for Education Statistics (NCES), the number of Hispanic college students is projected to grow by 15 percent in the next 10 years. In addition, NCES predicts that the percentage of African American students will increase by 7 percent within that timeframe. Thus, CUPA recommends that colleges and universities proactively recruit student affairs professionals who will be able to represent and relate to these growing demographics.

The CUPA report comes on the heels of new research showing that student affairs leaders are also more politically left-leaning than college administrators as a whole. Samuel J. Abrams, a professor of politics at Sarah Lawrence College, surveyed 900 student affairs professionals at a variety of institutions — large and small, public and private, two- and four-year — and found that liberal student affairs leaders outnumbered conservative-leaning ones 12-1. In an editorial in The New York Times, Abrams urged colleges and universities to recruit more ideologically diverse student affairs workers who better represent and serve all students. 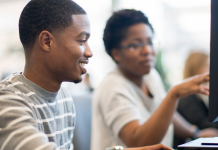