In the past several years, international enrollment at top private U.S. colleges and universities has increased considerably, resulting in greater competition between these and domestic students vying for admission to these schools — many of which are also experiencing overall surges in applications.

Federal data show that the number of applications to Ivy League schools increased 88 percent between 2004 and 2014. The data also show that freshman classes at these schools grew by only 5 percent during the same time, while the number of incoming international students increased by 46 percent.

Charles Deacon, dean of admissions at Georgetown University, told the Washington Post he is concerned that international enrollment is nearing unacceptable levels at some institutions. This, he believes, is subsequently crowding out qualified U.S. students.

“We’re in a global world,” Deacon said. “There certainly is an argument for the presence of foreign nationals at U.S. universities, but is there a tipping point where [there] is too many? That is an issue we have to reckon with.”

From 2004 to 2014, the number of international freshmen students at Georgetown rose 8 percent, from 3 to 11 percent. However, the university’s overall admission rate fell 5 percent during the same time frame, from 22 to 17 percent. Deacon said he believes those numbers are reasonable for a university in the nation’s capital with a school of foreign service and a global profile. Yet, other Ivy League colleges have also seen an uptick in international student enrollment.

Although Yale University’s overall enrollment has gradually increased since 2004, the Washington Post reports that international students have made up the majority of that growth, with the number of international freshmen going from single to double digits (11 percent) over the past 12 years. This growth necessitated a $500 million construction project for two residential complexes, slated to open in fall 2017, which will increase Yale’s enrollment capacity by 15 percent.

“We want to bring together an incredibly diverse student body — diverse in every way,” Dean of Yale College Jonathan Holloway told the Washington Post. “If we want to train the next generation of global leaders, we better have the globe here.” 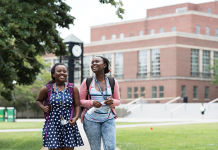 Recruiting International Students from Africa Is a Worthwhile Challenge