By 2030, the U.S. is expected to face a shortage of up to 120,000 physicians, according to the Association of American Medical Colleges (AAMC). Not surprisingly, research indicates that this scarcity exists primarily in low-income areas, where the affordability of and access to medical care are significant contributing factors to health disparities among marginalized groups.

[Above: ATSU’s Arizona campus in Mesa]

Schools of osteopathic medicine are helping to fill this need by recruiting a growing number of students to pursue careers as primary care physicians and specialists via the relatively new yet increasingly popular field of osteopathy. This holistic approach to medicine emphasizes the interconnectedness of the musculoskeletal and nervous systems and uses the physical manipulation of muscles and bones to diagnose and treat disease and injury.

According to the American Association of Colleges of Osteopathic Medicine, these schools experienced a 65 percent increase in enrollment over the past decade and are now responsible for educating nearly a quarter of the country’s medical students.

Faced with growing demand, some osteopathic medical colleges have established additional campuses in communities of need across the U.S. to expand upon their efforts to diminish healthcare disparities.

Andrew Taylor Still, MD, a physician, surgeon, and author, pioneered the field of osteopathy and founded the world’s first osteopathic medical college in 1892. The American School of Osteopathy — later renamed A.T. Still University (ATSU) after its founder — was established to prepare progressive male and female medical students to share this groundbreaking form of healthcare with the nation.

In recent years, ATSU has revitalized its mission to be a leading innovator in medical education by honing its approach to diversity and inclusion. In 2013, the university hired its first chief diversity officer, Clinton Normore, to lead this effort across its two campuses.

“Needless to say, there are vast cultural differences among our campuses and our programs, so a framework had to be established and … a strategy had to be crafted that would resonate across the university,” says Normore, who now operates under the title of associate vice president for diversity and inclusion.

ATSU’s original campus is in Kirksville, Mo., a rural town of 18,000 residents. By contrast, its second location is in Mesa, Ariz., a suburb of Phoenix that has a population of nearly 500,000. Founded in 2007, it is one of only two osteopathic medical colleges in the state.

Thanks to a unique partnership between ATSU and the National Association of Community Health Centers, many students at both campuses complete their clinical rotations at clinics designed to serve severely disadvantaged populations — such as the homeless or migrant workers — at little to no cost. Students can complete their rotations at nearby community health centers or at several partner sites located in underserved inner-city and rural communities across the U.S.

Excellence in treating diverse and disadvantaged patient populations is a fundamental goal for the university, says Normore.

To achieve this end, ATSU relies on a diversity education model known as cultural proficiency. Unlike cultural competency, which focuses on the learner becoming familiar with the norms and customs of individual cultures, cultural proficiency recognizes that there is no point at which a student can be considered fully “competent” in another culture, Normore explains. Instead, students are taught to view learning about other cultures as a lifelong process, one that requires consistently reflecting upon ways to improve interactions with and the treatment of patients from backgrounds that are different from their own.

For individuals and institutions, cultural proficiency means “looking internally with regard to our own biases, practices, and policies to determine whether they diminish our opportunities to interact effectively with and create spaces that are welcoming to different cultures and groups,” says Normore.

ATSU has adopted cultural proficiency as one of its five core professional attributes, which are the interdisciplinary skills that every student is expected to master by graduation. One way students learn how to explore their assumptions about and interactions with patients from underrepresented groups is by writing self-reflection papers on case studies and clinical experiences with diverse patients.

“Cultural proficiency is engrained in our curricular development and assessed throughout a student’s educational experience,” says Normore. “It’s rooted around student experiences that provide insight into their understanding of other cultures and perspectives.”

At the institutional level, ATSU has applied these principles by continuously looking for new ways to improve upon existing outreach and inclusion efforts. For example, the university no longer refers to its recruitment efforts of K-12 students as pipeline programming, opting to use the term “dreamline” instead.

“Pipeline is terminology that people who work in institutions of higher education understand, but [it does not] resonate with young people and their families,” Normore explains. “[We still] have an immersion experience, outreach efforts, and mentorship opportunities, but they’re referred to in a dreamline paradigm and include the perspective of the prospective student who maybe doesn’t know what she wants to do when she grows up.”

In addition, ATSU recently created a unique webinar series that shares the perspectives and insights of underrepresented members of its campus communities. For the “Getting There” webinar series, Normore interviewed a diverse array of students, faculty members, and graduates of ATSU’s two campuses regarding their path to higher education and the medical field.

The webinars are played at ATSU’s outreach and recruitment events, shared with prospective students, and made available online for the entire campus community to view. Normore says that interviewees appreciate having the opportunity to share their stories, and some underrepresented students have credited the videos with inspiring them to pursue medical education.

“We wanted to create a way for young people … to see others who may have similar backgrounds and experiences doing [the job] they hope to do some day and to hear about their challenges and successes,” says Normore. “[These interviews] are so that young people can understand that they too can be in that seat, they too can achieve that dream.”

Philadelphia College of Osteopathic Medicine (PCOM) has been a pioneer in redressing health disparities since its original campus opened in 1899. The college’s founders had a mission to provide Philadelphia’s residents with a broader array of treatment options beyond the limited medical services of that time period.

More than a century later, PCOM has furthered this mission by establishing the only osteopathic medical college in Georgia — a state that has close to the lowest number of doctors per capita, according to the AAMC.

In 2005, the college opened its Georgia campus (GA-PCOM) in Suwanee, a city near Atlanta that is located in the fifth most diverse county in the country, according to U.S. Census Bureau data. This diversity is reflected in the school’s student body: The Doctor of Pharmacy program’s class of 2021, for example, had an almost equal number of black and white students — a significant achievement for a field where less than 9 percent of practicing professionals are African American, according to the American Journal of Pharmaceutical Education.

Developing a healthcare workforce that is reflective of the diverse patient population is a top priority for the college, which is why the city of Suwanee was an ideal location, says Aisha DeBerry, JD, director of diversity and community partnerships at GA-PCOM. Her division works closely with the office of admissions to recruit area students by offering middle school, high school, and undergraduate pipeline programs as well as events at regional Minority-Serving Institutions, technical colleges, and more.

Just as important is having a faculty that mirrors the student population, adds DeBerry. “We are aware that our students … want to be taught by people who may share their same faith, values, race, [and] ethnicity,” she says.

GA-PCOM actively recruits diverse faculty and staff through outreach and events. However, DeBerry believes the most effective way to attract diverse employees is by ensuring that GA-PCOM has an inclusive workplace environment.

The President’s Diversity Council consists of faculty, staff, and students who meet regularly to maintain, support, and enhance diversity efforts that align with the college’s overall mission. The council also solicits input from employees on both the Suwanee and Philadelphia campuses to ensure they feel welcome and supported.

“[The council] has been charged with being a think tank for our campus, so getting feedback from our faculty and staff about if they feel included, if they feel they have opportunities to grow, and if they feel we have a diverse community is important,” DeBerry says. “We want to make sure we’re doing our part in-house to ensure that PCOM’s [diversity] message is true.”

One such effort, the LGBTQIA Council is composed of faculty, staff, and students from both campuses. It regularly advises the President’s Diversity Council on ways to make the campus a safe environment. Its recommendations have included hosting professional development and community outreach events aimed at improving LGBTQ+ healthcare.

Tiara Lewis, director of human resources, agrees that a major appeal of working for GA-PCOM is that all employees have an opportunity to have their voices heard. “If you have a safe place to talk about what your wants and needs are and you know that our president and senior administration are accessible, that makes it a lot easier than trying to compete for attention at a 20,000-person campus,” says Lewis. She notes that GA-PCOM’s efforts helped it earn recognition as one of Atlanta’s top workplaces from The Atlanta Journal-Constitution — a designation given to just 150 workplaces out of the more than 2,300 participating companies.

“[Our effort to be] an inclusive workplace has been truly supported by both of our campuses in terms of really putting the energy behind making sure that this is a safe place to work, a diverse place to work, and that there’s always the opportunity for more suggestions and more collaboration,” adds DeBerry.

In August 2019, PCOM will bring its unique brand of collaborative medical training to the severely underserved region of South Georgia by opening a third campus in Moultrie. With a population of 15,000 and the nearest metropolitan area more than 130 miles away, Moultrie has a physician shortage that is more acute than that of other places.

The college plans to hire 20 new faculty members and admit 55 students to the Moultrie campus by its opening. But no matter where its campuses are located, Lewis says PCOM will remain true to its mission to diversify the medical profession.

“Being able to provide great medical care and to have our campus be reflective of the communities in which we serve is our purpose no matter where we’re located,” she says. 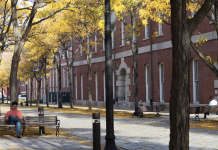