In the U.S., it is common knowledge that women earn 77 cents for every dollar men make. According to a new Medscape report, this imbalance is also prevalent in the physician workforce.

Medscape collected data from nearly 20,000 physicians in 26 specialties from November 2015 through February 2016. The report found that about half of male doctors claimed a net worth of $1 million or more, compared to only a third of female doctors. It also revealed that, on average, women in the profession make about 24 percent less than men.

While 20 percent of male doctors say they have a net worth between $2 million and $5 million, only 12 percent of women do.

Even as primary care providers, men make about 15 percent more than women.

Of all physicians, nearly 30 percent are women, with the majority working in specialty fields that are less lucrative.

According to a different physician survey by Doximity — a networking service for doctors — the biggest pay gap is within ophthalmology, where men earn 36 percent more than women — a difference of about $95,000. The survey showed that the narrowest pay gap exists in anesthesiology, at 12 percent.

In its survey, Medscape asked physicians to account for all their assets, as well as their mortgages, loans, and debts, when calculating their net worth. Also, the report notes that male and female physicians have similar spending habits and debt levels, indicating that those factors don’t account for disparities in net worth between men and women. 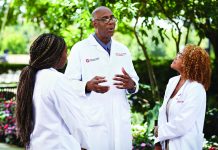