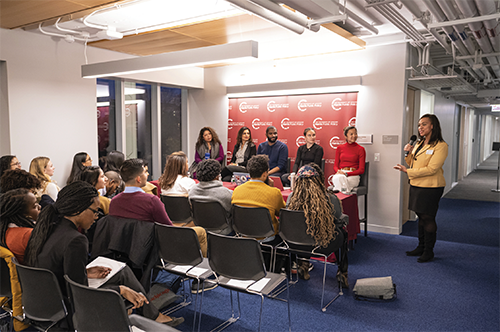 Na’ilah Amaru, an immigrant and dedicated war veteran, has led an illustrious career as an advocacy and policy strategist. Her roles have included serving as executive director for the Black, Latino, and Asian Caucus of the New York City Council and, in 2016, delivering the keynote address and nomination speech for Hillary Clinton at the Democratic National Convention.

Yet Amaru did not set out with a career in public policy in mind. She joined the army directly out of high school and served as an ammunition specialist in Iraq. Her military experiences exposed her to “the deep harm of institutionalized power,” she says.

“My new mission was to create and expand spaces that empowered society’s neglected and silenced,” says Amaru. “[Grassroots] organizing is fundamental to building sustainable, collective people power, but I wanted to make an impact on a different level, and that decision led me to the field of public policy.”

[Above: The University of Chicago Harris School of Public Policy launched Diversity Day in 2018. The event allows prospective students from underrepresented backgrounds to sit in on a class, listen to speakers, and network with students, alumni, faculty, and staff.]

Amaru went on to earn three master’s degrees in public policy, public administration, and urban affairs, respectively. She became an expert in what she calls “the different strategies and tactics to influence the policy process and outcome.”

Having diverse voices included in this process is essential to creating and implementing policies that are equitable, she says, as it is often the populations most harmed by public policies who have the least say in how these decisions are made. 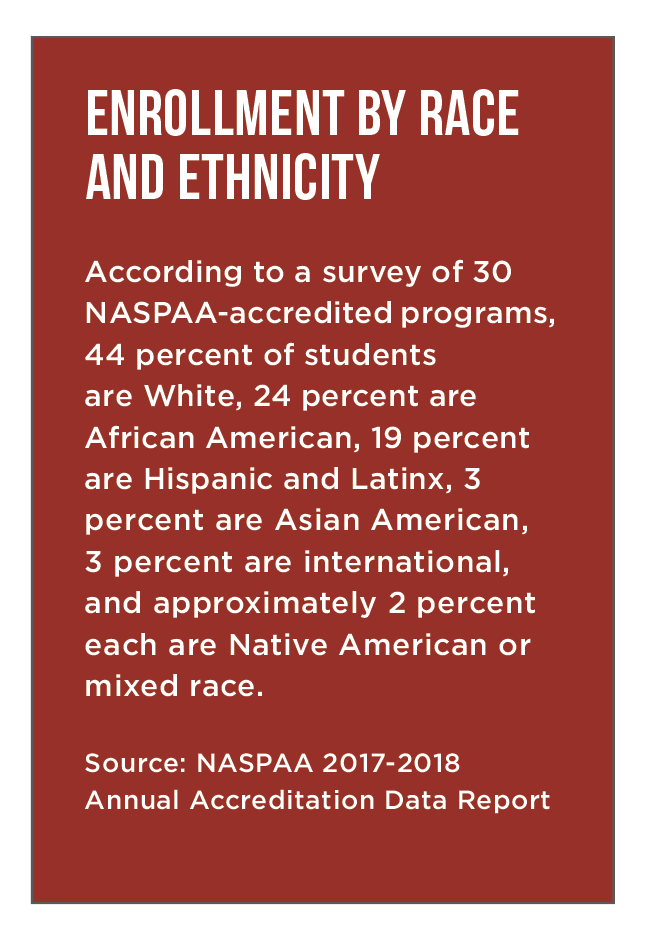 Recruiting underrepresented students to this field of study would diversify the public policy arena and effect positive change. Yet many students may be unaware of this field and the abundance of opportunities it provides.

“If you ask a typical college junior or senior what public policy is, they might not even know,” says Tara Sheehan, executive director of the Association for Public Policy Analysis and Management (APPAM). “And that’s not their fault; it’s our fault for not making it clear to them what [this discipline] means.”

Traditionally, getting a graduate degree in public policy or administration meant you planned to go into research or academia, according to Sheehan. Now, there is “really no one way to define what a public policy job is.”

“There are a million different public policy jobs out there,” she says. “Many practitioners work in government, think tanks, the private sector. … It just opens the door to a lot of interesting, important, and sensible career paths.”

A 2018 survey by the National Association of Schools of Public Affairs and Administration (NASPAA) found that 38 percent of students are diverse as defined by ethnicity and race.

APPAM, whose membership includes nearly 100 schools of public policy and administration, has supported diversification by launching student conferences and other initiatives.

“For our conference, we try to bring underrepresented students into the fold of the organization and [introduce] them to our member institutions as well,” Sheehan explains.

APPAM’s strategic diversity committee created a fellowship program for 40 students from traditionally underrepresented backgrounds that includes funding to attend these conferences, which are held twice annually at different locations across the U.S.

Undergraduates who attend can participate in public policy “camps” that introduce them to the field. The conferences also feature panelists and speakers from multiple sectors to showcase the variety of public policy careers. Past speakers have included a census specialist, a private sector economist, and a city manager for a small town.

Sparkle Dalphinis, associate director of student recruitment at the University of Chicago’s Harris School of Public Policy Studies (Harris), says it’s common to see people transfer to public policy from other disciplines. This is especially true among those who, like Amaru, have military backgrounds or who have worked in education, she says.

“Having worked in education, you see the challenges that the public school system is facing, and it evokes this emotion in you that makes you want to do something about it and help make a change,” says Dalphinis, who has a master’s degree in cultural and education policy.

Alumni of government-sponsored service organizations such as Teach for America, AmeriCorps, and the Peace Corps also tend to be interested in public policy degrees because they’ve seen the “on-ground challenges” of underserved communities, she says.

“Having different perspectives and backgrounds can help inform policies even when the data may be saying something that might not be the most beneficial for a community,”
says Dalphinis.

Minorities in Public Policy Studies (MiPPS), a Harris student organization, draws interest to the field by raising awareness of public policy issues that affect people from underrepresented groups. Among the school’s other recruitment efforts is an annual Diversity Day event that allows potential students from underrepresented backgrounds to sit in on classes, listen to speakers from the public policy sector, and network with students, faculty, and alumni. Harris provides travel and lodging reimbursement for participants so that the opportunity is financially accessible.

Other top public policy schools take similar measures to diversify enrollment. The University of Michigan Gerald R. Ford School of Public Policy partners directly with Teach for America, AmeriCorps, and the Peace Corps, in addition to a veterans’ organization. At the Richard and Rhoda Goldman School of Public Policy at University of California, Berkeley, special programs for students of color host campus awareness events and offer mentoring for undergraduates who aspire to pursue public policy careers.

While this career path comes with many challenges, it’s incredibly fulfilling for those who want to “build more vibrant communities and improve people’s lives,” Amaru says. “The impact of public policy can be felt for generations and extend past our lifetimes, so investing my skills and sharing my expertise to ensure government is using policy as an equitable tool is deeply rewarding.”

Mariah Stewart is a senior staff writer for INSIGHT Into Diversity. This article ran in the March 2020 issue.