This week, protestors have gathered nationwide, including on college campuses, to express their outrage against the recent police shootings of two Black men, Jacob Black in Kenosha, Wisconsin, and Trayford Pellerin in Lafayette, Louisiana.

A cellphone video depicted Blake, 29, being shot in the back on Sunday by a Kenosha police officer as he leaned into his SUV, which contained his three children inside. In the video, a total of seven shots can be heard. Although Blake survived the shooting, he is reportedly paralyzed from the waist down and may not be able to walk again.

The shooting comes in the wake of another act of police violence that occurred in Louisiana on August 21. A statement by the Lafayette Police Department alleges that officers were responding to a report of a disturbance involving a person armed with a knife. Upon arriving at the scene, police said they found Pellerin, 31, wielding a knife in a convenience store parking lot and began to shoot at him when he attempted to evade arrest by entering the store. He was shortly taken to a hospital where he was pronounced dead.

The shootings have resulted in civil unrest in Wisconsin and Louisiana over the last few days as well as in other parts of the country. Protests have already been a continuous occurrence over the past few months in response to the murders of unarmed Black individuals by police, including George Floyd and Breonna Taylor.

On Monday in Madison, Wisconsin, 200 people congregated at the state Capitol building before marching to the University of Wisconsin-Madison campus in a demonstration against Blake’s death. According to a report by The Daily Cardinal, protestors encouraged onlookers, including students in fraternities and sororities, to “get out of the house and onto the streets.”

Students also organized a protest at Ball State University in Muncie, Indiana. “I’m just tired of it, waking up and seeing Black people murdered on the news every day. It’s just irritating,” Kiarra Harbey, a freshman criminology major at the university, said to The Ball State Daily News.

At the University of Nebraska-Lincoln campus, the Black Student Union led a sit-in as a call for justice for Black victims of police violence.

In Kenosha, tensions further increased on Tuesday night when a White 17-year-old wielding a semi-automatic rifle shot at protestors in the streets, killing two people and wounding another. The suspect, Kyle Rittenhouse, was taken into custody on Wednesday and charged with first-degree intentional homicide.

Although community leaders and Blake’s family have called for peaceful protests, others believe protestors have a right to express their anger.

“Outraged protesters uphold principles no different from those articulated in the founding documents,” Myisha Cherry, a philosophy professor at the University of California, Riverside, told The Atlantic. “This makes their anger not anti-American, but as American as one can get.” 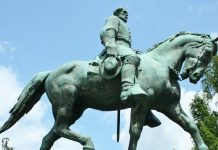 More Than 160 Confederate Symbols were Removed in 2020, Report Finds 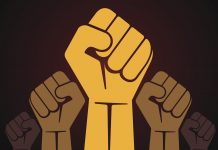 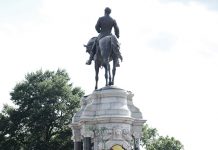 Symbols Matter: Colleges and Universities Respond to Movement Against Racist Imagery and Namesakes