In his “Letter from Birmingham Jail,” Martin Luther King Jr. wrote a searing rebuke to his white clergy brothers, who had voiced their disapproval of his visit to Birmingham while remaining silent regarding the racial injustices that the city’s African American citizens were experiencing, which had brought King to the city in the first place. Of note, King addressed his critics’ notion that negotiation should be sought as a more acceptable approach to resolving racial injustice over direct action, such as sit-ins, marches, and protests. On this matter, he and his brethren shared the same perspective. Indeed, direct action is the last step in any nonviolent campaign and is preceded by the collection of facts (to determine if injustice exists), negotiation, and self-purification.

After further examination of King’s letter, one learns that negotiation should occur twice within a nonviolent campaign: prior to and following direct action. In fact, the principal outcome of direct action is to catalyze negotiation. King explained, “Nonviolent direct action seeks to create such a crisis and establish such creative tension that a community that has consistently refused to negotiate is forced to confront the issue. It seeks so to dramatize the issue that it can no longer be ignored.”

With so many protests — on college campuses and beyond — over the last few years, I’ve often wondered how many organizers of such demonstrations have used the four steps of a nonviolent campaign developed and executed by King and other civil rights activists during the 1960s. In particular, I have been curious about the knowledge and preparation of college student protesters. In fall 2016, my curiosity led me to ask students in my nonprofit management class if they have ever participated in a protest on campus. Many of them said they have. I also asked them if they were aware of the four steps of a nonviolent campaign championed by King — a question that was greeted by blank stares.

Students who want to or have already engaged in protests should have a solid understanding of the motivations that drive their desire to be part of a movement — beyond simply participating in our nation’s democratic process.

In that moment, I had to remind myself of the fact that most of my students are 19- or 20-year-olds who were born and reared during a time of relative peace, compared with the social unrest experienced by college students of the 1950s and ’60s. The Black Lives Matter movement, the rise of white nationalism, and President Donald Trump’s travel ban, along with his crackdown on undocumented immigrants, have disrupted the status quo. Fear, discontent, anger, and distrust are now the new normal on U.S. college campuses.

Thus, it is incumbent upon university leaders, faculty, and staff to be intentional and provide students with training and other capacity-building development as they engage in nonviolent protests on college campuses. There are three big ideas I share with those in my student protest and activism class that I believe should be covered as faculty, staff, and university leaders prepare students to engage in nonviolent protests: protest is costly, protest is strategic and multidimensional, and protest is influenced by biography.

Protest Is Costly
The fundamental reason people protest is to give voice to the experiences of injustice, unbalanced treatment, and violations of moral or ethical codes that govern a given society. Put simply, people protest to give voice to those issues for which they are most passionate and to bring an end to oppression — the circumstance where a person’s ability is arrested and he or she is withheld from reaching his or her full human potential by either a person, a group of people, or a system. In order to become liberated from the shackles of oppression, people must fight for their liberation — and this does not come easy.

Some 20 years ago, when I was the vice president for the Black Student Union at Indiana University-Purdue University Indianapolis, I recall our faculty adviser, a tenured professor of history and an activist during the ’60s, imploring us to “burn the place down!” We all thought he was kidding, but our response was no laughing matter. Indeed, we wanted to fight the good fight against injustice, but we also wanted to graduate, not do anyone or anything harm, and not face felony arson charges.

My point here is that the consequences of fighting injustice can be costly. As educators, we should not gloss over this reality. We should prepare our students to consider the costs associated with “fighting the power,” and I can think of no better tool than that of self-purification. Students need to go through a self-discovery process in which they ask themselves questions to ascertain their level of grit, tolerance, and wherewithal as they face the prospect of being arrested, harassed, and physically and mentally harmed, among other acts of intimidation.

Protest Is Strategic and Multidimensional
One protest over a particular issue is not going to bring about the change that many are seeking. Successful protests and movements use a multipronged, strategic approach. It is my sense that many students have engaged in direct action — protests, marches, and sit-ins — without a full understanding or appreciation of its nuances. As noted above, it creates tension so that negotiation can be achieved.

A noteworthy example of students’ direct action leading to negotiation and resolution occurred at the University of Missouri, where, in 2015, students protested and the football team threatened to boycott games if university leadership did not resolve racial unrest on campus. The resolution was the resignation of the university president and system chancellor. There are many components to direct action, such as constituent pressure (the football team) not to perform, which leads to economic concerns, political pressures, or media and social media exposure, which tarnishes the institutional brand value and credibility.

Protest Is Influenced by Biography
As I witnessed the Women’s March on Washington a few months back, I tweeted, “One person, one rally, one march, one movement can make all the difference in the world!” Just like a fire can be ignited with a single match, a movement can start with a single person. The match is devoid of diversity, but the person is a very complex, diverse being. To understand why protests and movements are started, we have to understand the person or people who ignite them.

Students who want to or have already engaged in protests should have a solid understanding of the motivations that drive their desire to be part of a movement — beyond simply participating in our nation’s democratic process. These motivations are born from one’s life experiences and perspectives on what is just, moral, and equitable. Unearthing one’s motivation to protest can prove to be a powerful weapon as students prepare to fight injustice and oppression on campuses across the U.S.●

William T. Lewis Sr., PhD, is an adjunct faculty member at Salem College, a former chief diversity officer, and the founder and principal member of ZeroIN HR Solutions, LLC. He is also a member of the INSIGHT Into Diversity Editorial Board. 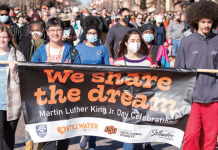