An experimental program to reduce stigma around mental health issues has proven successful at Indiana University Bloomington (IU), according to researchers.

National nonprofit organization Bring Change to Mind (BC2M), which seeks to reduce the stigmatization of mental illness, launched an undergraduate pilot program in 2014 at IU called “U Bring Change to Mind” (UBC2M). The program is the first of its kind and targets the entire campus population in its objective to improve visibility and attitudes regarding mental health issues, according to its website.

In partnership with IU’s College Toolbox Project (CTP), UBC2M supported students in creating and leading  awareness events, including discussion series, art exhibits, scavenger hunts, and more. IU researchers who observed UBC2M and CTP’s work over the course of four years found that these efforts were successful in reducing the stigmatization of mental health issues.

“A long-term, community-based, student empowerment approach with institutional support is a promising avenue to reduce stigma on college campuses, develop the next generation of mental health leaders, and potentially reduce societal levels of stigma in the long run,” researchers wrote. “CTP provides evidence that both contact and contextual visibility matter and that UBC2M offers a nationally-networked organizational strategy to reduce stigma.”

Previous research has found that although individuals today tend to have a greater understanding of psychological health and wellbeing, many people still express animosity towards mental disorders and illness, according to the study. UBC2M and CTP’s efforts, however, were successful not only in improving campus climate but in reducing prejudice in students who had previously had negative experiences during their interactions with individuals having mental disorders or illness.

“We’ve been able to open up discussion networks within friendship groups, within classrooms, for people to feel comfortable to disclose that they have mental health problems,” IU professor Bernice Pescosolido, who led the study, told local news source WVUB.

Pescosolido and her team analyzed data from more than 1,000 students who completed online surveys between their sophomore and senior year at IU. Women accounted for 70 percent of respondents, 82 percent were White, and 17 percent reported having a current or past mental illness, according to the study.

A 2017 national survey from the National Institute for Mental Health found that 75 percent of psychological disorders happen before the age of 24 and that 73 percent of college students report having experienced a mental health crisis.

Actress Glenn Close and her sister Jessie Close founded BC2M a decade ago in order to fight discrimination and raise awareness of mental illness. They launched UBC2M to share effective strategies such as those developed by CTP at no cost to colleges and universities. 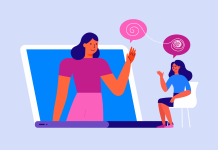