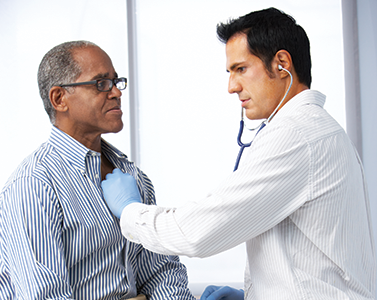 Despite the overarching benefits, genetic tests for the disease work better for White children than for those of color. Tests are 98 percent accurate in White infants, but the lack of information about Black, Asian, Latinx, or other children of color is so severe that scientists aren’t even sure how accurate the tests are for those groups, according to Eimear Kenny, PhD, associate professor of Medicine and Genetics at the Icahn School of Medicine at Mount Sinai (ISMMS) and director of the Center for Genomic Health.

Genetic testing overall is more accurate for White people than for people of color, according to a 2019 study by researchers at the Broad Institute of MIT and Harvard published in Nature Genetics.

This disparity means new prescription drugs and other advanced healthcare developments will systematically benefit individuals with European ancestry more than people of color if changes aren’t made, according to the study.

The solution is to diversify genomic data, or information about the genes in a cell. Nearly 70 percent of studied genomic data come from people of European descent, making it difficult to study how non-White people might benefit from genetic testing and medicine personalized according to their genes, Kenny says.

For instance, if scientists had collected and studied more DNA samples from people of color over the decades of research into cystic fibrosis, it would be easier to more accurately identify the disease in them today. 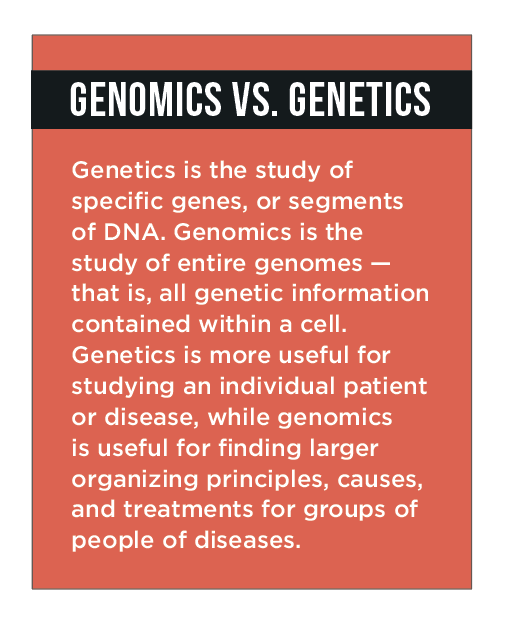 The accessibility and popularity of genetic testing has exploded in the past two decades. When the Human Genome Project, an international research effort to determine the DNA sequence of the entire human genome, was completed in 2003, it cost $3 billion dollars and took 15 years to complete sequencing. Nearly 20 years later, an individual can go online and have their own genome sequenced for about $1,000.

“It’s really amazing how quickly the technology has developed,” says Kenny, who was the senior author of a recent study on diversity in genomic data. “Because of that, human genomics is now something that is really driving a lot of innovation. The innovation is in research, but also into health systems and societies.” 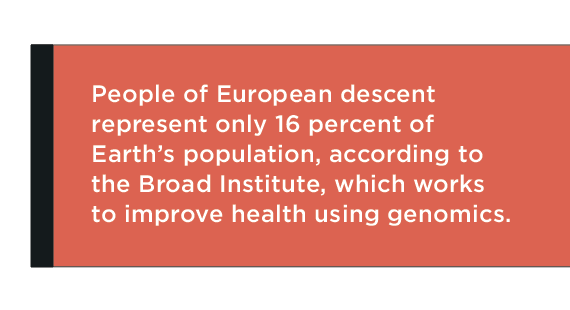 Healthcare systems such as hospitals and clinics routinely include genetic testing for diagnosis and family planning purposes, while private industries like 23andMe and Ancestry provide it for recreational purposes.

The lack of diversity in DNA samples has been highlighted as an issue in recent stories about inaccurate or incomplete results for African Americans after they take DNA tests. The more data available on a certain group, the more accurate those tests will be.

Whether it’s for recreation or for assessing risk for diseases such as cystic fibrosis, breast cancer, heart disease, or diabetes, diversifying datasets to include samples from people of color will increase knowledge about health issues and will make a difference in personal healthcare as medicine advances, according to the Broad Institute.

Unlike other biological sciences, genomics is primarily observational, Kenny says. It is extremely difficult to theorize about how a set of genes is organized. The only way to develop personalized medicine for people of color is to study their genomes by including their DNA samples in biorepositories — massive collections of complete genetic data. 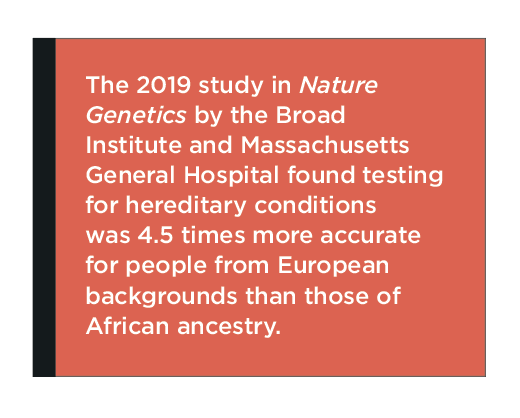 “Genomics is failing on diversity,” Kenny says. “If the knowledge base you’re using does not represent most of humanity, that’s going to cause all sorts of problems for the practice of medicine.”

In the early days of genomics, researchers believed it prudent to focus on a single, homogeneous population for statistical reasons. They wanted to create a control group that would help avoid misleading results due to variability in the data.

“It was a well-established concern and a well-meaning effort,” Kenny says, “but the effect means the population they focused on was European and of European ancestry to the exclusion of sampling other populations in research settings.”

Modern researchers recognize that diversity in data does not negatively affect outcomes. In fact, it improves them. Intentions aside, logistical problems also played a role in the lack of diversity in today’s data.

When originally collecting samples, researchers and healthcare professionals gathered them from their patient populations, meaning they accepted “anyone who walked in the door,” Kenny says. The demographics in areas where research occurred likely caused a bias in the data.

Development of diagnostic technology has also failed to consider diverse populations. Tools that test for the presence or absence of specific gene sequences, for instance, are designed in such a way that they perform optimally for people from European backgrounds. Kenny and her colleagues at Mount Sinai developed a multiethnic tool that could be used for testing people from more diverse ancestries — just one example of the kind of efforts scientists should make to improve effectiveness in genomic testing.

Another logistical concern is the suspicion of medical testing on underrepresented groups, and for good reason. In the Tuskegee experiment, one of the most infamous examples, the U.S. Public Health Service duped Black men into believing they were participating in research on “bad blood” without being told they were actually being studied for the non-treatment of syphilis.

The researchers’ motive was to improve treatment for syphilis by studying the effects of treating versus not treating it. They used Black men as the control group, choosing to not treat them when healthcare could have helped, resulting in undue suffering, congenital defects in children, and numerous deaths.

In another example, researchers at Johns Hopkins took cancer cells in 1951 without consent from Henrietta Lacks, an impoverished Black tobacco farmer. Scientists used her biological samples in perpetuity without her or her family’s knowledge, in some cases making a profit from them.

“Once you damage trust, you really have to go a long way to reestablish trust and reestablish connection,” Kenny says. She believes the ethical community has placed enough restrictions and regulations in place to prevent experiences like Lacks’ from happening again.

White researchers hoping to engage more diverse communities need to understand the ethics behind engaging with new populations who have different cultural expectations. Engagement needs to take the form of a partnership and should be established in a way that builds tools to get around the problem. There are a number of ways researchers can help build a true partnership with diverse communities, including the following:

● Seek discoveries that will benefit the community as a whole.

● Partner directly with a diverse group of clinicians who can provide improved communication with and information about their patient population.

● Expedite communication of findings to clinicians and people affected by the study.

● Consider implicit bias when deciding whom and what to study.

“The scientific community, much like the genomic databases, are skewed toward a White workforce,” Kenny says, “but things are changing. Universities are encouraging diverse students and leaders to enter the workforce and stay.”

The simplest solution to diversifying genomic data is for researchers to decide they’re going to diversify their data — and then do it.

ISMMS in New York City is one institution working to build biorepositories with diverse sets of genetic data. Their mission in a recent medical trial was to recruit more than 65 percent of participants from underrepresented communities, which mirrored the population of the city.

The Broad Institute also urges researchers to expand their genomic studies to include diverse ethnic groups. A 2017 study by institute researchers, for example, uncovered previously unknown mutant genes that appear to cause increased rates of deadly prostate cancer in Black men.

“The success of this effort in uncovering subtle genomic differences and revealing a new prostate cancer gene demonstrates the power of including diverse populations in genetic analyses,” the institute stated in a news release. “Discoveries made from studying patients of diverse ethnic backgrounds can shed light on the underlying biology of this disease for all patients.”

The more researchers use genetic data to treat people from all backgrounds, the more those diverse communities will benefit from personalized medicine advances.

Kelsey Landis is the editor-in-chief of INSIGHT Into Diversity. This article ran in the June 2019 issue.