The passage of the Post 9/11 GI Bill created the most generous education package the U.S. had seen since the end of World War II, with the federal government offering to pay for up to 36 months, or four years, of higher education for anyone who served in the military after September 11, 2001. In addition, other funding sources are available in the form of scholarships, grants, and education subsidies to help servicemen and women complete postsecondary degrees.

However, paying for a graduate degree is a different story.

Although GI Bill benefits can be applied toward a master’s or doctorate degree program, many students exhaust them paying for their undergraduate education. Furthermore, the majority of other funding sources for military members, such as private scholarships, are geared toward undergraduates. Thus, those who want to further their education are left with few options, aside from taking out hefty loans. This is the situation Charles King found himself in.

As a full-time college student and member of the National Guard, King was sent to Iraq in 2002. After a two-year deployment, he returned to the U.S. to complete his bachelor’s degree at Chapman University, using the GI Bill to pay for tuition and expenses. Upon graduation, King held various jobs and continued to serve in the military as an inactive duty reservist before deciding to attend graduate school. The problem, though, was the price tag.

“My goal was to apply to Harvard Business School and get my master’s degree,” King says. “I thought I’d look around and see what was available as far as scholarships and grants, because tuition at the time was around $83,000.”

King knew there were plenty of scholarships and grants available to help current and former service members pay for an undergraduate degree, but he was surprised to find that the same wasn’t true for those who wanted to pursue graduate education. He decided to use what was left of his GI Bill benefits to pay for business courses at Harvard Extension School while continuing to seek funding for a master’s degree. Finding few possibilities, King decided to act.

He got to work creating a nonprofit organization that would provide scholarships for current and former military members to attend graduate school. Over the last three years, he conducted the research, outreach, and fundraising necessary to build the organization, which he named Veterans Higher Education Corporation (VHEC). VHEC’s board of directors is made up of volunteers who, believing in the organization’s mission, have given their time and skills to help launch it; these include several veterans who served with King in Iraq and have faced similar challenges to funding their education. VHEC’s corporate sponsors include, among others, Bank of America and American Corporate Partners, an organization that helps veterans transition to civilian life.

With VHEC, King’s initial goal is to provide five to seven scholarships beginning in the 2017-2018 academic year. To qualify, applicants must be veterans or current active-duty service members who have completed at least four years of military service and have a minimum undergraduate GPA of 3.0. A committee composed of VHEC board members and corporate sponsors will select recipients based on their past academic performance and an essay detailing their career goals. Ideally, each scholarship will cover the full amount of tuition for one academic year, and students will be eligible for renewal for up to two additional years.

King says he has spoken with many current and former military members who, like him, have used most or all of their GI Bill benefits and now feel stuck because of their inability to pay for a master’s degree. “It’s a catch-22 because you have a lot of veterans who would like to pursue those types of degrees, but they can’t afford it,” King says. Similarly, he says many companies and employers are interested in hiring and promoting veterans but can’t do so if those individuals don’t have the qualifying advanced degrees.

According to the U.S. Bureau of Labor Statistics, roughly 11 percent of American jobs by 2020 will require a graduate degree; most of these will be in healthcare, communications, and STEM. Considering the large number of veterans who pursue these fields — 32.6 percent of bachelor’s degrees earned by these individuals are in science and engineering — and the fact that they are graduating from college at a rate of 100,000 per year, today’s student veterans stand to benefit greatly from graduate education.

Earning a higher degree can have added benefits for these individuals beyond advancing their careers and incomes, says King. For a soldier returning from deployment, he says, the challenges of adjusting to civilian life and finding a suitable job — while also dealing with PTSD or physical disabilities resulting from combat — can be overwhelming. “When you’re trying to transition back into the civilian world,” King says, “school becomes a safe place where you can go and just focus on your education.”

King hopes VHEC will have a positive impact on servicemen and women accomplishing both their educational and career goals. And, in the future, he hopes to expand scholarship offerings to aid men and women on campuses across the country. “Every year,” he says, “our goal is to increase the number [of scholarships] and to get on as many campuses as we can.”●

Mariah Bohanon is a senior staff writer with INSIGHT Into Diversity. To learn more about VHEC, visit vheccorp.org. 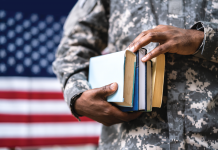 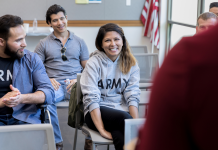