Forty years ago, a dozen women gathered in Washington, D.C., to provide support to one another regarding their small businesses. As described by the group’s founder, the late Susan Hager, that “local self-help group … gained visibility … and received hundreds of telephone calls from all over the nation about what [they] were doing.”

Later, under Hager’s leadership, those women transformed their discussions about contracts, access to capital, and other business concerns into a nonprofit membership organization called the National Association for Women Business Owners (NAWBO).

NAWBO was formed to “open doors for women entrepreneurs by transforming public policy and influencing opinion makers,” according to the organization’s website. Still based in Washington, D.C., NAWBO now boasts 5,000 members in 60 chapters across the U.S. and has representation in more than 60 countries around the world.

A dues-based organization, NAWBO has exerted its influence to help pass key legislation for women business owners, including HR 5050.— better known as the Women’s Business Ownership Act of 1988. Among other things, this landmark bill ended state laws that required women to have a male relative co-sign business loans, extended the Equal Credit Opportunity Act to women, and allowed for the creation of Women’s Business Centers and the National Women’s Business Council.

Overseen by the Small Business Administration’s (SBA) Office of Women’s Business Ownership, Women’s Business Centers are a network of nearly 100 offices in the U.S. that provide support to help women start and grow companies. The National Women’s Business Council is a federal bipartisan council composed of prominent women business owners. It advises the president, Congress, and the SBA on business and policy considerations. Signed into law by President Ronald Regan, HR 5050 also required the U.S. Census Bureau to include women-owned C corporations in its data to better represent female business ownership in government statistics.

In this changed landscape, NAWBO — whose membership spans “solopreneurs to large businesses” — advocates for legislation and policies ranging from including women in SBA federal procurement assistance programs and on lists of minority business owners to making healthcare costs more affordable.

In 2005, in the aftermath of Hurricane Katrina, NAWBO formed Women BizRelief, a program to help women entrepreneurs who had been adversely affected by the hurricane. The organization quickly raised $40,000 in individual contributions, which it then distributed to women business owners affected by the storm. In 2012, NAWBO’s nonprofit education foundation, the Institute for Entrepreneurial Development, received a $10,000 donation from the Sara Blakely foundation — Blakely is the founder of Spanx — to help launch an e-Learning webinar designed to provide information and ideas to women regarding business growth. “NAWBO’s message is that we are here, and we can help,” says NAWBO National Board Chair Teresa Meares.

In addition to political advocacy and providing access to information and resources for women entrepreneurs, Meares, who is also owner and president of DGG Tactical and Uniform Supply in Jacksonville, Fla., believes that networking is something that NAWBO does well. “We have a community and a support system,” Meares says. “When you go to a conference or a networking event and you get around other women, you start to realize that you are not alone. You realize that there are other people who have the same problems as you — and you recognize that you are in control.”

Looking ahead, she says that NAWBO is planning partnerships with the SBA to develop certifications for women business owners and with Babson College for a virtual six-course business program. Additionally, Meares believes that NAWBO needs to focus on sustainability. “Education and resources are important,” she says. “[But so is] making sure that we identify and support women who want to grow their businesses and add employees.”

For its 40th anniversary, NAWBO hosted its annual conference in Texas, the same state where the organization held its first annual conference, in 1982. While much has changed in the U.S. and in the business world since then, NAWBO remains committed to effecting positive change for women business owners, with a goal to “get back to its roots as an organization that sees the need for change and does something about it,” its website reads.● 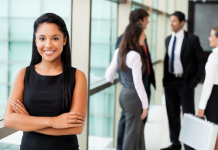