On Sunday, former New York City Mayor Michael Bloomberg announced that he is donating $1.8 billion to his alma mater, Johns Hopkins University, to go toward student financial aid. According to school records and adjusting for inflation, the gift is believed to be the largest private donation to a college or university “in modern times,” according to The Washington Post.

In an op-ed published in The New York Timesyesterday, Bloomberg said that the purpose of the donation is to ensure that students are admitted to the university based on merit rather than wealth.

According to Johns Hopkins President Ronald J. Daniels, Bloomberg’s gift will enable the university to permanently offer need-blind admissions, meaning applicants’ finances will not play any role in admissions decisions. Daniels told The Washington Post that the university has been using a need-blind admissions process for the past eight years but has been reluctant to advertise the policy for fear that it wouldn’t have the financial resources to sustain it.

Furthermore, Bloomberg’s contribution will make it possible for the school to meet the full financial need of all admitted students starting next fall. The money will also be used to help undergraduates who are currently enrolled repay their federal student loans.

In hisop-ed, Bloomberg argued that more alums of elite institutions should donate money to their alma maters for financial aid. Many of these universities — including Johns Hopkins — charge nearly $70,000 annually for tuition, fees, and room and board. Meanwhile, federal Pell Grants geared toward low-income students provide an annual maximum of just $6,095.

Bloomberg also indicated his hopes that his donation to Johns Hopkins will help reduce intergenerational poverty and promote social mobility. He cited a recent analysis by researchers at Brown University and Harvard University showing that the majority of students at many of the most selective colleges in the U.S. come from the top 1 percent of the income scale. Highly qualified low- and middle-income students tend not to apply to these types of institutions because they don’t think they can afford it, Bloomberg said.

Ted Mitchell, president of the American Council on Education, told reporters he believes Bloomberg’s donation is a first step toward more widespread change. The record $1.8 billion serves as a call to action to donors and policymakers across the country that U.S. higher education needs to do a better job of promoting social mobility, Mitchell says. 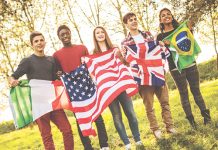