While sexual harassment of female medical students and practitioners by colleagues and superiors has garnered some media attention — especially in the wake of the #MeToo movement — there has been little public discussion of one of the most common forms of abuse faced by women in the medical profession: harassment by patients.

Over 75 percent of 420 female physicians reported being verbally or sexually harassed by a patient at some point in their careers, according to a 1993 study published in the New England Journal of Medicine. The study found that physicians most often faced issues in their own offices and by their own patients; however, the more concerning and higher risk incidents occurred in emergency rooms and clinics with patients they didn’t know. The findings were shocking enough to gain attention from The New York Times and other mainstream media, yet very few studies or public discussion of this rampant abuse has occurred since.

One factor likely hindering progress around patient-physician sexual harassment is the prevalence of harassment from superiors and colleagues. Numerous research studies have shown that this is a systemic problem for female medical students and professionals, a fact attributed to the hierarchal nature of the profession, which until recently has remained male-dominated. Health profession schools and employers have therefore been focused primarily on devising solutions in this area, which is also easier to track and resolve than patient harassment, says Kim Templeton, MD, a professor of orthopedic surgery at University of Kansas Medical Center and former president of the American Medical Women’s Association (AMWA).

“There is discussion generally about [sexual] harassment and bias, but the focus tends to be regarding other healthcare providers, peers, and superiors,” she says.

Meanwhile, the problem of patient harassment is something that has been quietly acknowledged in the medical community but not thoroughly addressed or researched since the 1993 study, Templeton says, adding that she is currently in the process of creating a survey to gauge issues of bias, harassment, and any other barriers experienced by AMWA members.

There are few solutions available to a female physician who is being sexually harassed by a patient when her primary concern is effectively treating that person, she says. “It’s harder to address this with patients and their families without interfering with the trust that is needed to provide good patient care,” she says. Transferring the patient to another doctor’s care may mean the problem is just passed along to another female physician, especially as women are poised to outnumber men in the field, says Templeton, citing the fact that more women than men enrolled in medical school in 2017 for the first time in U.S. history.

This trend should be further cause for medical schools to begin discussing and providing in-person training to help students prepare for the negative treatment they may encounter from patients, she says. “Scenarios or roleplay would be a great way to get this across,” says Templeton.

The Mayo Clinic School of Medicine (MCSM) is one of a few healthcare institutions working to prepare students for the possibility of patient harassment. “[MCSM] actually has looked at this policy and training issue through a broader lens to include not only patient-to-female physician — which is important — but any patient-to-physician mistreatment,” says an MCSM representative. “Within our medical school, there is training currently being developed with scenario examples and helpful scripts on how to handle mistreatment situations of various natures.”

Maren Dunn-Chandler, MD, says she was completely unprepared for her first encounter with this issue. The topic was never covered in classes or clinical training, though gender discrimination in the form of bias and harassment was a common occurrence for her when she worked in the hospital setting. Professional discrimination from superiors and harassment from colleagues were more frequent than from patients, but all three played a part in her decision to become a family physician in a private practice — where, in her experience, the problem is far less common. For the most part, she has been able to laugh off instances of patients being inappropriate, though several have made her extremely uncomfortable.

Still, the harassment and abuse from patients she has experienced pale in comparison to the frequency and severity of this problem for the nursing staff.

“From my perspective as a doctor, I see harassment way worse on the nursing staff — a thousand times worse,” Dunn-Chandler says. “They are so rarely appreciated and so often disparaged.”

Caitlin Kilts, assistant professor at the State University of New York at Delhi School of Nursing, agrees that sexual harassment from patients can be a frequent and often traumatic experience for nursing students and those who are new to the profession.

“Students come out of the patient’s room, and you can tell when it happens, because they look shell-shocked,” says Kilts. “Most of the time they come right out … and talk to me about it.”

Informal harassment training then typically takes place on the spot, with Kilts often going back into the room and discussing the situation with both patient and student, generally outlining the necessity for mutual respect.

“We don’t seem to be talking about the [harassment] component in the bigger picture,” Kilts says of medical and healthcare education. “We’ll talk about it at the nurses’ station but don’t really have a systematic way of dealing with it. And that’s something I think [medical education] is really lacking.”

Barbara Jordan, an administrator for the Office of Diversity and Inclusion at Mayo Clinic College of Medicine and Science — which encompasses MCSM and four other schools — says the college’s goal is to ensure sexual harassment prevention and awareness is woven into every learning experience. “It shouldn’t be an add-on,” says Jordan. “With the heightened awareness raised through the #MeToo movement and others around mistreatment and sexual harassment, I think most higher learning institutions are looking closely at what they have in place and what more should or could be done to prevent these issues.”

Jana Bounds is a contributing writer for INSIGHT Into Diversity. This article ran in our May 2018 issue. 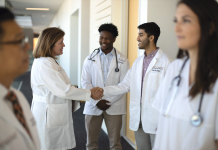