A new report finds Americans largely value racial and ethnic diversity in the workplace, but not always when it involves career advancement.

The Pew Research Center recently released a study that followed the social and demographic trends of 6,637 adults in the United States. The study found that 75 percent of adults believed it is “very or somewhat important” for companies and organizations to promote diversity. But more than 70 percent of adults believe racial and ethnic diversity should not be taken into account during the hiring and promotion process, and only qualifications should be considered, even if it results in less diversity.

When companies make decisions only based on skills and do not consider race, systematic discrimination becomes unavoidable. A 2017 study from Proceedings of the National Academy of Sciences of the United States of America (PNAS) found that hiring discrimination of Black and Latinx applicants has not improved for over 25 years. The PNAS research concluded that White applicants receive 36 percent more callbacks than equally qualified African Americans, while White applicants receive nearly 25 percent more callbacks than Latinx and Hispanic individuals. 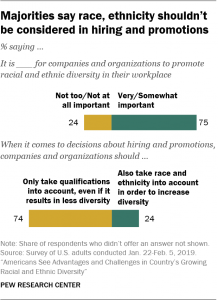 The Pew research comes during a time when affirmative action has been targeted by the federal government. Texas Tech University most recently eliminated its race-based admissions process at the Health Sciences Center based on an agreement from the civil rights unit of the U.S. Department of Education. A 2016 Gallup poll found that most Americans oppose affirmative action.

The Pew study found 57 percent of adult respondents think diversity has a positive effect on the country, but Black Americans place the most value on workplace and school diversity compared to White and Latinx Americans.

The survey shows over 60 percent of White Americans think children should go to local schools, even if it makes the institutions less diverse. Nearly 70 percent of Black respondents said students should go to schools that are racially and ethnically diverse, even if that means traveling out of their neighborhood. The survey also found that approximately three in 10 Americans say it would bother them to hear people speak a language other than English in public.