In 2012, Sarah Swanlund, a library specialist in the James Madison University (JMU) Rose and Carrier Libraries, noticed an opportunity. “I saw a need for art, and I knew that the library had a desire to bring in diverse students,” Swanlund explains. Those observations spurred her proposal to work with other members of the JMU community to create a mosaic on campus.

“I had [led] mosaic projects before and thought it would be a great way for the library to attract some of JMU’s diverse student groups,” Swanlund says. “A mosaic lends itself to large groups because it involves putting together many small pieces to make something big and wonderful. The process gives a real feeling of community and cooperation.”

Swanlund and several of her colleagues applied for and received one of JMU’s Innovative Diversity Effort Award (IDEA) grants to create what is now the Rose Library Mosaic of Diversity. Unveiled in 2014, the 48-foot-tall work of art was created by representatives from 40 campus groups, in part through a series of workshops Swanlund used to teach students the mosaic process.

JMU created the IDEA grants program to provide funding to students, faculty, and staff who want to test original ideas or develop sustainable activities and projects focused on enriching diversity and inclusion at the university. Established in 2006, it supports activities that embrace a variety of socioeconomic statuses and backgrounds. The university’s Office of Diversity Programs and Events describes these as “any combination of ethnicity, religion, sexual orientation, national origin, gender, disability, age, and veteran or military status.”

Founded in Harrisonburg, Va., in 1908, JMU has a total enrollment of slightly over 21,000 students, of whom approximately 20 percent are ethnically diverse.

Arthur Dean, executive director of campus and community programs in the Office of Access and Inclusion, points out that inclusion — described by JMU as the effort to build engagement around valuing each person and the educational benefit he or she brings to campus — is one of the university’s six stated values. The IDEA program, he says, helps advance JMU’s diversity and inclusion goals across campus and beyond.

“Each IDEA project [represents] a desire to take a risk and try something that could have an impact on the campus or local community [in regard to] inclusion or awareness about people, groups, and social identities,” Dean says.

To apply for an IDEA grant, individuals, departments, or groups at JMU submit proposals for projects that promote diversity in innovative ways. A committee appointed by the Office of Access and Inclusion reviews proposals and recommends those to receive the grants. Factors for recommendation include feasibility, originality, duration, the potential impact of the program on campus, and the sustainability of the project and its follow-up activities.

In some cases, as with the library mosaic, IDEA grant activities primarily involve the university community. However, awards are also granted for projects that extend beyond JMU’s campus — for example, a 2015 initiative called Back-to-School Boot Camp.

JMU assistant professor of nursing Christine Argenbright, PhD, and her colleague Margaret Bagnardi, EdD, conceived of the idea for the boot camp in collaboration with other JMU nursing faculty and community leaders, including Dena Reed, founder of the out-of-school learning program Precious Gems Academy.

Another IDEA grant project called We Are JMU, designed to acclimate students at the college level, has been sustained on campus since it was launched in 2009. “The orientation program, submitted by a group of students and administrators, is now facilitated for all incoming first-year students — over 4,500 each year,” Dean says. “The program highlights the notion that we are all part of the JMU community and that all students are welcome to be themselves and share who they are.”

Over the years, IDEA grant recipients have developed programs, services, and events to serve a wide array of diverse students, faculty, and staff, including but not limited to international students, refugee children, children in the Boys and Girls Clubs of America, first-generation students and faculty members, low-income students, Hispanic faculty members, and individuals with disabilities. Disciplines underlying IDEA proposals have spanned art, history, music, theater and dance, religion, technology, human resources, health, science, math, communications, and more. Grants of up to $4,000 each are awarded every spring semester. In the last eight years, JMU has awarded nearly $270,000 to 87 grantees.

Beyond dollars and cents, the broad impact of these efforts is apparent to those involved. “The Back-to-School Boot Camp project strengthened the ties in the community between JMU and local teachers, parents, and children,” says Argenbright.

Dean offers a similar sentiment. “The IDEA program has provided a grassroots-level approach to systemic change within our community,” he says. “[Even] if an idea is not selected by the committee, our office tries to determine if collaboration or other methods of funding or support can be acquired. The program has been transformative over the past 10 years.”

Based on the success of the first mosaic, Swanlund applied for another grant for a similar project on which she would work closely with JMU’s Center for Multicultural Student Services. “The [initial] mosaic project made me more involved with the campus community,” says Swanlund. “I met many people and interacted with organizations that I otherwise would not have had the opportunity to [get to] know.”

Beyond each IDEA project’s immediate impact on the groups involved, Swanlund has high hopes that the program will have a ripple effect on the wider JMU community.

“I hope that by creating work that has a permanent place in the library, diverse student groups will feel more visible and welcome,” she says. “I also hope that as JMU continues to support projects like this one, diverse students will continue to feel seen and heard.”● 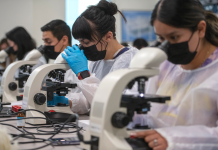