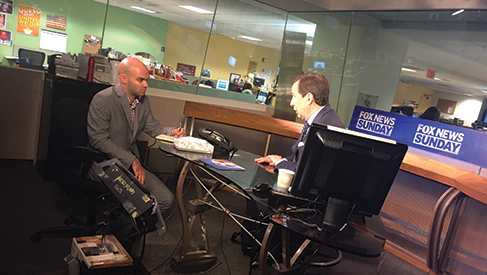 In late January 2017, a reporter for American Public Media’s business radio show “Marketplace” wrote a blog post on the website Medium entitled “Objectivity Is Dead, and I’m Okay with It.” The reporter, Lewis Wallace, argued that all journalists bring a unique perspective to their work and are capable of upholding the truth without positioning themselves as neutral.

He asserted that journalists who come from underrepresented groups — Wallace himself is transgender — are incapable of being “neutral or centrist” when covering issues, events, or individuals that represent a threat to their fundamental human rights. He wrote, “Can people of color be expected to give credence to ‘both sides’ of a dispute with a White supremacist?”

Wallace was later fired on the grounds that he had violated Marketplace’s code of ethics, which requires staffers to keep their political views private. He now works as an independent journalist in Durham, N.C.

[Above: Freelance journalist Pete Vernon (left) conducts an interview. After writing for the Columbia Journalism Review for three years, he relocated to Botswana, where he works as a journalist and a teacher.]

Media scholars have historically found the journalistic framework of “objectivity” to be problematic. Barbie Zelizer, PhD, has “long argued against the standard of objectivity and neutrality, maintaining that it’s an unachievable ideal. … We’re actually introducing more harm to our understanding of how journalism works by insisting that it needs to be upheld,” she says. Zelizer is the Raymond Williams Professor of Communication and director of the Center for Media at Risk at the University of Pennsylvania (Penn) Annenberg School for Communication.

The term “view from nowhere” describes the absence of perspective that can come from upholding a perfect ideal of objectivity, according to Jay Rosen, a media critic and associate professor of journalism at New York University.

Journalists run the risk of behaving more like stenographers than writers when they take a “view from nowhere.” In other words, they engage in a “he said, she said” pattern of reporting in which they present opposing, mutually exclusive views without shedding light on their topic.

Other media experts go further, saying journalists increasingly need to protect themselves and stand up for the profession in an era when their integrity is in question.

The “sphere of deviance” encompasses speech that journalists are expected to “disregard or denounce” because the facts in such language cannot stand in debate. For instance, President Donald Trump’s frequent assertions that Mexican immigrants are “criminals” could be considered to fall into the sphere of deviance because it is not a legitimate claim.

Over time, political issues can move from deviance to legitimate controversy to consensus, according to Hallins’ theory. Two examples of this include the issue of women’s voting rights and full U.S. citizenship for African Americans. Those topics moved from being controversial in the past to being generally accepted today. In other words, society came to a consensus.

Columbia Journalism Review writer David Mindich argues that certain circumstances allow for journalists to call out deviant speech and advocate against it while still remaining fair and credible in the eyes of their readers.

One such circumstance is when public opinion supports the idea that a politician’s speech is deviant. He writes, “That the vast majority of Democrats and quite a few Republicans … speak out publicly against Trump gives cover to journalists who choose to depart from the usual practice of studied balance.”

When it comes to Trump’s comments about Mexicans being rapists or former President Barack Obama not being a U.S. citizen, freelance journalist and former CJR reporter Pete Vernon argues that it is paramount for journalists to use words like “racist” and “lie” to categorize such claims.

“When you have enough evidence about a person’s statements and beliefs, as we did with Donald Trump well before he ran for president, it’s fair to say that certain actions he has taken are not ‘racially charged,’ not ‘racially tinged.’ They are racist,” he says, “and that’s factually supported with evidence.”

Furthermore, Vernon believes that journalists are failing on some level when they use vague adjectives like “controversial” if an action or statement is more aptly described as “racist” or “untrue.”

“This isn’t true of every statement the president makes, and I don’t think you need to say that he as a person is racist. He provides enough opportunities to call certain actions or statements themselves racist,” he adds.

Journalists must still be fair and truthful in their accounts and avoid staking out a political position unless they specifically identify as an advocacy journalist, says Jack Doppelt, JD, a professor in the social justice and investigative reporting concentration at Northwestern University’s Medill School of Journalism, Media, and Integrated Marketing Communications.

But Doppelt says even truthful, fact-based reporting involves some element of individual perspective. “I’m sure that the facts I would choose will be different from the facts that somebody else would choose because we’re all idiosyncratic individuals,” he says.

Journalists can achieve credibility with readers if they collect and organize facts in a way that is careful to avoid distortions of the truth. Doppelt is in the process of articulating a set of norms and ethics for social justice journalism to ensure that students can illuminate the experiences of disenfranchised and oppressed populations while still maintaining a certain level of detachment.

Such norms and ethics differ somewhat from the standards of mainstream journalism. A social justice-oriented journalist telling the story of an undocumented individual may be more open to accepting the input of anonymous sources for safety reasons. Checking for accuracy when using anonymous sources is one example of a skill that Medill students in the social justice specialization learn in order to create journalism that remains credible while still attending to the needs of vulnerable communities.

Objectivity in the Trump Era
In a recent Washington Post opinion piece titled “Trump Doesn’t Believe His Own Damaging Rants about ‘Fake News,’” media columnist Margaret Sullivan argues that Trump’s accusations of media bias are a direct response to responsible, fact-based reporting that proves to be inconvenient or unflattering to him.

Trump’s inconsistency with the “fake news” label — for example, granting high profile interviews to The New York Times and later disparaging them — is evidence that he resorts to the pejorative “fake news” term when presented with “accurate coverage that he doesn’t like.”

Zelizer argues the U.S. and the rest of the world are living in an era where the credibility of journalists doing fair and truthful reporting is being attacked by powerful figures who feel personally threatened by their coverage.

She believes that when journalists try to be “objective” under these political circumstances, they usually end up adopting an attitude of deference to the people in power, which prevents them from doing their job of telling the truth. Thus, she argues for journalism that is fair and truthful, but also unapologetically direct.

Beyond being credible, Zelizer encourages journalists to stand their ground when political figures try to intimidate them. She does not think journalists are doing enough to challenge people like Trump when they distort the truth or attack various underrepresented groups.

The soft-handed approach is directly tied to the “unrealistic ideal” of journalistic objectivity, which not only creates an “absence of perspective” but also causes journalists to adopt an attitude of deference in their efforts to be “moderate,” Zelizer says.

A February 2017 Reuters message to its reporters supports Zelizer’s belief that journalism in the Trump era is a whole new ball game. The message, titled “Covering Trump the Reuters Way,” reminds reporters that “Reuters is a global news organization that reports independently and fairly in more than 100 countries, including many in which the media is unwelcome and frequently under attack.”

The U.S. has entered a new era in which it is no longer leading the rest of the world when it comes to the democratic ideal of a free press, Zelizer says. She asserts that academics and media practitioners, specifically journalists, are the two most detested and disrespected populations worldwide. To address these challenges and combat political intimidation toward journalists across the globe, she founded the Center for Media at Risk at Penn in 2018.

The center not only focuses on threats to journalism, but also on the difficulties facing documentary filmmakers, the entertainment industry, and digital media practitioners. Recent events sponsored included a two-day workshop about best practices for protecting investigative journalists and documentarians and a symposium about political cartoonists at risk, both in the U.S. and around the world. The center is also co-hosting an ongoing series at Penn to explore data at risk of elimination, particularly data related to climate change.

Zelizer believes that the challenges facing journalists go beyond the debate about objectivity and accounting for perspective in the news. “It’s really a larger question of what has to be the role of the media when you’ve got democracies that are turning autocratic.” 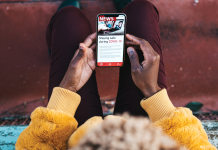 Foundation Awards $1.2 Million to Colleges, Nonprofits to Combat Disinformation in Communities of Color

Veterans Advocate for More Reporters from the Military