This week, Discover Financial Services, Inc., announced that it will cover the full cost of college — including tuition, fees, books, and supplies — for both full- and part-time employees who work at least 30 hours a week. Discover’s decision is part of a recent trend by U.S. companies to help employees pay for postsecondary education.

Other companies, such as Wal-Mart, McDonald’s, and Taco Bell, have also extended education benefits to their workers in the past six months. Wal-Mart recently announced that full- and part-time employees who have worked at the company for at least 90 days can earn an online associate or bachelor’s degree, for which the company will pay most of the costs; employees contribute $365 per year, or just $1 a day. Other large-scale corporations that have sought to upskill their workers through tuition reimbursement programs include Starbucks, UPS, FedEx, Home Depot, Lowe’s, Chipotle, and Lyft, among others.

Such benefits are in part a public relations move aimed at offsetting criticism that these corporations pay low wages and have high turnover rates. In the case of Wal-Mart, which only pays for degrees in business administration or supply chain management, covering the cost of college tuition is also a tactical move to build a pipeline of future store managers. (Many Wal-Mart employees, however, responded to news of the program with skepticism, stating that they would instead prefer higher wages.)

At Starbucks, which in 2014 partnered with Arizona State University to cover partial tuition costs for employees to earn a degree in any field of their choosing, company leaders said that their goal was to simply retain employees as they earned their degrees. They added that the move was also designed to cultivate brand loyalty so that employees would be more likely to patronize Starbucks once they moved forward in their careers.

As this trend gains momentum, more and more of these companies are working with third-party providers to help administer their tuition-reimbursement programs. A company called Guild Education has emerged as a major player in this respect, raising more than $30 million in funding since 2015 to serve as an intermediary between employees, employers, and more than 80 universities. It makes its money by sharing a cut of the tuition revenue from the universities it partners with. Guild is the negotiator for both the Wal-Mart and Discover programs as well as those at Chipotle, Lyft, and Taco Bell.

Perhaps one reason Guild is growing so fast is because it offers several benefits to all parties involved. It provides advising services to employees, coaching them on where and what they should study to meet their career goals, as well as how to balance their work and study schedules. It also helps colleges increase their enrollment without them having to invest in large marketing campaigns and aids employers who need the help of a third party to be able to offer tuition assistance but who can’t afford to pay expensive fees in order to do so.

The first cohort of students to complete a college degree via a Guild program graduated this spring. 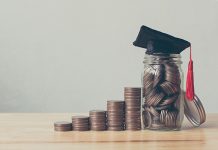