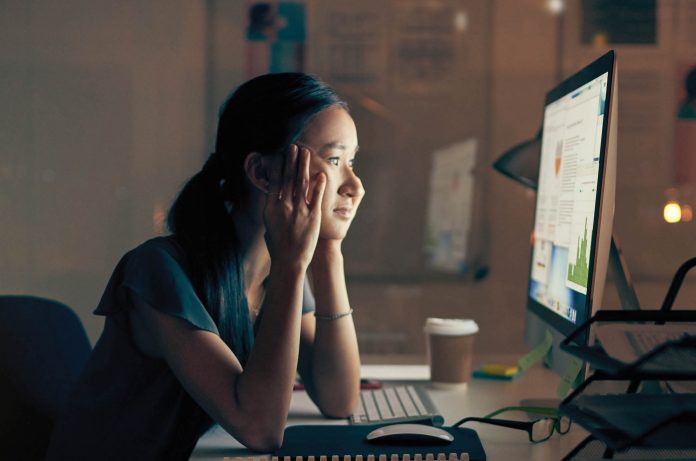 On September 28, University of Iowa graduate student Claire McDonnell recorded a video call of herself and a group of male classmates discussing plans for an upcoming class project. She then uploaded the brief clip to the video-sharing app TikTok with the label “live footage of being a woman in STEM.”

Within 48 hours, McDonnell’s video had been viewed 2.4 million times.

In the recording, McDonnell is consistently interrupted by her classmates as she attempts to contribute to the discussion and pitch ideas for their assignment. In some cases, group members simply repeat McDonnell’s statements, effectively presenting her ideas as their own.

The thousands of comments on her TikTok post include messages from a multitude of women, both students and professionals, describing similar experiences during virtual classes and meetings.

As McDonnell explained in an interview with BuzzFeed.com, the discussion with her classmates was all the more frustrating because she was the only member of the group who had actual work experience with the assignment’s topic of commercial underwriting. Such interactions occur “on a daily basis,” she told BuzzFeed.

“If [women] present an idea, whether it’s theoretical or any type of opinion, it’s always like [male classmates] are very hesitant to believe it. And if they do believe it, then they take the credit like, ‘I already knew that,’ and repeat it to other people and claim it as their own,” McDonnell stated.

These types of gender imbalances have been well-documented over the years by researchers studying workplace and classroom communication. Now, with much of the world working and learning online, activists and experts have begun calling attention to how this form of gender bias and discrimination occurs in virtual spaces.

Gender Imbalances in Meetings and the Classroom 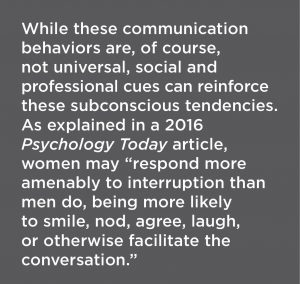 Multiple studies have shown that during in-person meetings, men are more likely to interrupt women, subvert or take credit for their ideas, talk longer and at louder volumes, and be argumentative or critical. By contrast, women are more likely to apologize for speaking up or having opinions, tend to be self-deprecating, and make brief contributions to group discussion.

“Women often feel that they don’t want to take up more space than necessary, so they’ll often be more succinct,” Deborah Tannen, a professor of linguistics at Georgetown University, explains in an April 2020 article in The New York Times. Women’s linguistic behavior tends to be based on a desire to be seen as likable, whereas men are more driven to sound authoritative, according to Tannen.

Furthermore, researchers have repeatedly found that perceptions of men and women in group discussions reflect and reinforce these types of learned linguistic behaviors. In surveys, performance reviews, and student grades, women rank lower for speaking more often and are perceived as less likable when they try to be assertive in meetings. Men, on the other hand, rank higher and are seen as more competent or as having leadership qualities. Experiments have shown that women’s suggestions in workplace meetings are more likely to be ignored or not believed, even when — as in McDonnell’s case — the woman speaking has more expertise on the subject at hand than male colleagues.

In virtual spaces, “these imbalances are amplified,” Tannen told the Times.

Miscommunication and interruptions are common in online meetings due to technology issues and the inability to clearly read body language and behavioral cues as compared with in-person discussion. Problems with internet connectivity “can make it difficult to know what was said and who spoke last,” and contribute to women being left out of the conversation, according to a 2020 Mashable.com article titled “How to be a better ally to women on Zoom.” 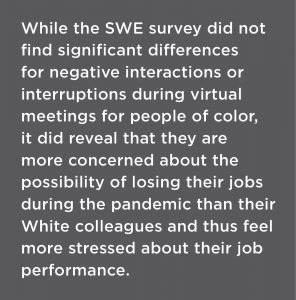 Tannen isn’t alone in recognizing how virtual spaces contribute to male-dominated conversation. In a June 2020 survey of students and working professionals, 31 percent of women and genderqueer or nonbinary respondents “reported getting talked over, interrupted, or ignored more frequently during virtual meetings than those held in person,” according to a report by the Society of Women Engineers (SWE).

Managers, teachers, and classmates or colleagues who are cognizant of these biases can help improve gender equity in virtual spaces. Expert educators recommend establishing expectations for discussions at the beginning of a class, informing and enforcing guidelines about how to take turns and the extent to which each person is expected to participate. In Tannen’s own Zoom classes, she uses tactics such as calling directly on students, using hand symbols, and communicating during discussions via the chat function, she told the Times.

Leaders and colleagues can also be better allies to women in virtual discussions by pointing out gender imbalances when they occur. Sarah J. Brazaitis, associate professor at Columbia University Teachers College, explained in an article on Mashable that she has told online classes in which men were dominating the conversation “that she is happy to hear their input, but she also wanted to hear from the women.”

Male classmates and colleagues can be allies by asking a woman participant directly what she thinks about the topic at hand or by asking her to go back to a point she was making earlier before she was interrupted. In these situations, it’s important to remember that it isn’t a woman’s fault if she is ignored and that the onus shouldn’t be on her to fight for space in a conversation, Brazaitis states. Male allies should bear in mind that it is each woman’s right to speak as a participant in the class, not a privilege bestowed on her by male classmates when they give her permission, she says.

Brazaitis also notes that women can and should be allies for themselves and each other. Directly pointing out when a woman is interrupted and asking her to continue her point is a good method to “immediately stop the interruption in its tracks instead of allowing it to carry on,” she states.●