Children in rural Washington State are learning core values through what some might see as an unusual combination — soccer and coding.

The Real Madrid Foundation is the philanthropic arm of the Spanish soccer team Real Madrid. The foundation operates in countries worldwide to promote “the values inherent in sport, and the latter’s role as an educational tool capable of contributing to the comprehensive development of the personality of those who practice it,” according to its website.

Game On! also aligns with Microsoft’s vested interest in developing computer skills and promoting STEM awareness among youth in rural and low-income communities, Rodriguez says. Both the foundation and Microsoft provide annual training to Game On! leaders.

Together, the mission of the three groups “aligns with what we want to do to serve our students and communities and prepare them for future careers and opportunities,” Rodriguez adds.

The Real Madrid Foundation provides the curriculum for the soccer and coding program, Microsoft donates software and monetary support, and CWU coordinates Game On! For eight to 10 weeks in the fall and spring, each participating school provides about 45 minutes of coding and an hour and a half of soccer at least twice per week to Game On! students, who are typically from underrepresented and low-income backgrounds.

Field trips in between quarters allow students to visit the CWU and Microsoft campuses. Rodriguez says this opportunity opens participants’ minds to a world of technology and higher education that they might have thought was out of reach.

“Many of the students come from very rural communities lacking technology. … A lot have heard college is not attainable or have not been pushed to pursue higher education,” Rodriguez says. “Coming to CWU helps them experience what it’s like to be a college student, meet professors, sit in a classroom, and really eliminate the fear and misconceptions around higher education.”

Leonardo Lopez, a Game On! participant and seventh grader at Washington Middle School in rural Yakima, Washington, says he plans on attending college to become a doctor. His experience with Game On! has already taught him to help people.

“You can communicate with your teammates and learn how to communicate with kids and learn different things about them,” Bazan says. “I had to share with friends my skills, and then they show me their skills as well. … I learned to work with other kids I didn’t know.”

Program leaders say they hope to expand Game On! to reach more students like Lopez and Bazan. The first pilot program began in 2016 with just two schools and 35 students. As of the 2018-2019 academic year, Game On! had a total of nine sites and 515 participants with an equal number of girls and boys.

The program is free to schools, which are responsible for choosing the participants based on need. The schools are not looking to serve athletes but hope to engage students “who are disconnected from academics or don’t have a sense of being a part of something,” Rodriguez says.

Funding for Game On! depends largely on institutional and legislative support. CWU pays for salaries and student staff, but the costs are growing along with the program. Washington state lawmakers allocated $200,000 to support the program in 2018-2019.  This year, the state approved a $442,500 budget request that will provide $221,250 each year through June 2021, Rodriguez says.The pathway to college after Game On! is long, so leaders expect to be able to gather results in the coming years on how many students pursue higher education. The initial results are promising, however. In the 2017-2018 academic year, 19 former program participants enrolled in college. That number increased to 23 in 2018-2019, Rodriguez says.

Rodriguez hopes in the coming years those numbers will continue to grow as the program expands. Microsoft recently committed to donating $54,000 to support an expansion to Mattawa, Washington, another rural community.

For more information about Game On!, visit cwu.edu/game-on.

Kelsey Landis is editor-in-chief of INSIGHT Into Diversity. This article ran in the November 2019 issue. 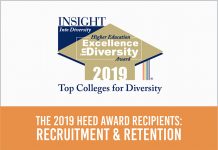