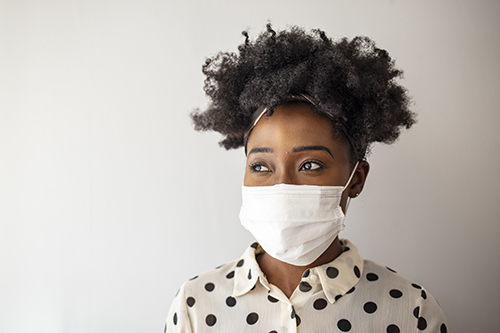 As many colleges and universities take steps to reopen their campuses for the fall semester, some are planning to require that students and employees wear face masks while on campus to reduce the possibility of exposure to COVID-19. For people of color, however, wearing a facial covering comes with its own safety risks.

For Black men, concealing portions of the face may “intensify racist perceptions of criminality, especially to police,” according to an article on Vox.com. Since the Centers for Disease Control and Prevention first recommended that the general public use cloth coverings for the nose and mouth in early April, there have been multiple reports of racial profiling of African Americans who abide by this public health guideline.

Xavier Yardley Adams, a Black graduate student at Duke University, explained his feelings concerning face masks in a May interview with The News & Observer. “I am concerned that some White people will further dehumanize and vilify people of color in their minds because face masks hide so many of the expressive features of human faces,” Adams stated, adding that he feared this villainization could lead to acts of violence against African Americans.

Some Black men have reported that they won’t wear bandanas or other homemade masks in public, opting instead to only use disposable masks that reduce the chances they will be viewed as intentionally trying to conceal their features, according to The New York Times.

Concerns over racial profiling have intensified as protests over police brutality and systemic racism spread worldwide following the police killing of George Floyd on May 25. Students at many colleges and universities have begun urging administrators to discontinue or lessen the use of law enforcement on campus, and some institutions — including the University of Minnesota — have cut ties with local police departments. At certain institutions, student activists are pushing for campus security to be required to take anti-bias training; in some cities, police departments have begun requiring anti-bias training specifically related to the use of face masks.