On January 29, 2016, the Equal Employment Opportunity Commission (EEOC) announced that it is proposing to require the annual submission of pay data as part of the Employer Information Report, known as the EEO-1. This form must be submitted annually by employers with more than 100 employees and federal contractors and first-tier subcontractors with more than 50 employees and a contract or subcontract of $50,000 or more.

Currently, the EEO-1 must be  submitted to the Joint Reporting Committee each year by September 30 and requires covered employers to include data on race and ethnicity, gender, and job categories. The 10 job categories are as follows: Executive- and Senior-Level Officials and Managers, First- and Mid-Level Officials and Managers, Professionals, Technicians, Sales Workers, Administrative Support Workers, Craft Workers, Operatives, Laborers and Helpers, and Service Workers.

In a fact sheet, the White House stated: “Policies that ensure fair pay for all Americans and that help businesses to attract the strongest talent can not only narrow the pay gap, but also boost productivity and benefit our economy. Yet today, the median wage of a woman working full-time, year-round in the United States is about $39,600 — only 79 percent of a man’s median earnings of $50,400. While the gap has narrowed slightly over the past two years, there is much more work to be done to ensure fair pay for all.”

The pay data collection report will cover more than 63 million employees, according to the White House’s estimate. The proposed regulations were announced as part of the January 29 commemoration of the seventh anniversary of the Lilly Ledbetter Fair Pay Act.

The EEOC’s proposed regulations would require employers, contractors, and non-contractors with 100 or more employees to provide aggregated data on pay ranges and hours worked beginning September 2017. The aggregated compensation data would also encompass 12 pay bands. Employers would identify employees’ total W-2 earnings for a 12-month period looking back at a pay period between July 1 and September 30. Academic institutions, which file the IPEDS Report with the Department of Education rather than the EEO-1 report, are not covered by this proposed rule.

In a news release, the EEOC stated: “The new pay data would provide EEOC and the Office of Federal Contract Compliance Programs of the Department of Labor with insight into pay disparities across industries and occupations and strengthen federal efforts to combat discrimination.”

According to the EEOC, the data would have an added benefit by enabling employers to conduct internal analyses of their compensation policies and practices. While the additional data collection requirement would impose more responsibilities on employers, it would use the existing EEO-1 platform, which the Obama administration asserts would minimize the compliance burden on employers and the implementation costs to the government.

That there is a wage gap has been established, although the extent to which discrimination is the cause has not been determined.

A 2016 report published by the Council of Economic Advisers (CEA), titled “The Gender Pay Gap on the Anniversary of the Lilly Ledbetter Fair Pay Act,” states: “When holding education, experience, occupation, industry, and job title constant, a pay gap remains. As mentioned above, some research has found that this unexplained portion is a substantial share of the total gap. By definition, one cannot explain the remaining part of the wage gap, but the impact of discrimination and biases contribute to the ‘unexplained’ portion of the gap.”

The EEOC’s proposal is the latest of several attempts over the years to add a pay requirement to the reporting of equal employment opportunity data. In addition to the Paycheck Fairness Act and other legislative initiatives, the Office of Federal Contract Compliance Programs (OFCCP) published a Notice of Proposed Rulemaking in August 2014 to collect summary compensation data from contractors in a new Equal Pay Report. The rules would require covered federal contractors and subcontractors with more than 100 employees to submit an annual Equal Pay Report on employee compensation.

In 2000, the OFCCP succeeded in adding an Equal Opportunity (EO) Survey to its regulatory requirements for federal contractors. The survey required not only compensation data, but also information regarding personnel activity, including applicants, hires, promotions, and terminations. The EO Survey also used the EEO-1 categories as the format for the data collection. Before the survey was promulgated, the agency conducted a pilot survey and found that the race and gender wage gap reported in the civilian labor force was reflected in the establishments that participated in the pilot.

The reasons for the EO survey were not unlike those expressed by the EEOC: encouraging employer self-audits, focusing limited agency resources, and identifying potential wage disparities. The EO Survey was rescinded by the succeeding administration.

If the employer response to the addition of compensation data to the EEO-1 Form resembles the reaction to the Department of Labor’s proposed rule in 2014 and the EO Survey in 2000, the EEOC’s proposal will not be uncontroversial.●

Shirley J. Wilcher, JD, CAAP, is the executive director of the American Association for Access, Equity, and Diversity. She served as director of the OFCCP from 1994 to 2001. Wilcher is also a member of the INSIGHT Into Diversity Editorial Board. For more information, visit eeoc.gov. 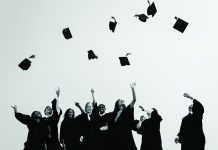 Experts Are Cautiously Optimistic for Graduates Entering the 2021 Job Market