At Columbia University, Dennis Mitchell is helping fill the pipeline for minorities in the dental profession, a field where they are woefully underrepresented.

Columbia’s College of Dental Medicine (CDM). He also is senior associate provost for faculty diversity and inclusion at Columbia University.

“Ten to 12 years ago, it was just me and my staff. Now I have a hundred graduates, so when a student of color comes in for an interview, I can send that student to lunch with someone who looks like them,” Mitchell says. “That’s critically important.”

Mitchell came to Columbia 23 years ago under a unique partnership with Harlem Hospital to hire minority residents among its faculty. He credits the CDM’s progress in increasing minority student enrollment to commitment from the top.

“The decision of the dean to highlight and target diversity was a huge step toward progress,” says Mitchell, who accepted his first diversity role at Columbia in 2003.

Since joining Columbia’s staff in 1991, Mitchell has made it his mission to increase the number of minorities represented in the dental profession. This is a job for which he has his work cut out for him.

The most current census data show that minorities make up just 6 percent of the U.S. dental workforce. One reason for this deficit might be the educational barriers faced by some minorities. One of the biggest obstacles is inadequate early education, Mitchell says.

“If the core fundamental education isn’t there, it’s harder for them to compete at the highest level,” he says.

Thanks to Columbia’s Summer Medical and Dental Education Program (SMDEP), its dental school is experiencing significant gains in minority enrollment.

When Mitchell was appointed senior associate dean for student development for the College of Dental Medicine in 2003, minority enrollment was at a dismal 3 percent. Today, minorities make up 20 percent of the college’s enrolled students.

“SMDEP was a big game changer for us,” Mitchell says.

This free six-week residential program prepares college students from underrepresented populations to pursue careers in medicine or dentistry. Established in 2005, it is funded by the Robert Wood Johnson Foundation, the largest foundation in the U.S. devoted solely to public health.

Students may apply for SMDEP through their respective colleges and universities, working with their pre-health advisers. Additionally, the Association of American Medical Colleges (AAMC) and the American Dental Education Association (ADEA) participate in recruitment fairs across the country to find potential applicants.

To be selected for the program, a student must be enrolled as a freshman or sophomore in college; have a minimum GPA of 2.5; be a U.S. citizen or hold a permanent resident visa; come from a racially or ethnically underrepresented group; have demonstrated interest in issues affecting underserved populations; and submit a compelling personal statement and strong letters of recommendation.

“What we have is 80 underrepresented young men and women who come to our campus every summer,” Mitchell says. “Well over 70 percent of graduates from our summer program have been accepted into the dental program.”

Of 12 SMDEP university sites nationwide, Columbia is considered a model because of its longtime commitment to addressing access to care issues in the community, says Mark A. López, senior director for access, diversity, and inclusion with the ADEA and co-deputy director of SMDEP.

“Being in the heart of Washington Heights [N.Y.], Columbia has been doing great work providing care in the community, as well as helping underrepresented, disadvantaged young people gain entry into our profession,” López says. “Columbia really has been a trailblazer in the community in this line of work.”

The summer program, combined with an array of other minority programs at Columbia, has created a culture of inclusiveness — which helps attract minority candidates to the dental school, Mitchell says.

“We have over 200 students of color on our campus each summer who are in a variety of programs. That all feeds into the environment of inclusiveness,” he says. “When it comes to dental schools, students of color are going to select us. We get outstanding students. They will help our profession evolve.”

Among those students is Dominick Ambroise, 25, an African American in his senior year at the dental school. Currently a resident of New York, he is the son of Haitian immigrants and a married father of one.

“I applied to five dental schools in metro New York,” Ambroise says. “When I visited Columbia, I saw that the university was making an effort to bring along minorities. It’s an over-the-top effort to help you feel that people care about you.”● 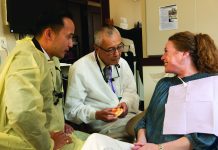