The study, “Winners and Losers: Universities and the Pursuit of the American Dream,” compares postsecondary institutions based on how many students from low-income households rose in economic status by their late 20s and early 30s.

Using data from the Harvard University-based Opportunity Insights project, authors Jorge Klor de Alva and Cody Christensen analyzed individual earnings for students who were born between 1983 and 1985 and who attended college at some point between 2001 and 2004. The authors determined that more than half of the low-income students in the study ended up “reaching one of the two highest income quantiles of individuals in their late 20s or early 30s” and that nearly 8 in 10 low- and middle-income students “moved up the earnings ladder by at least one quintile.” 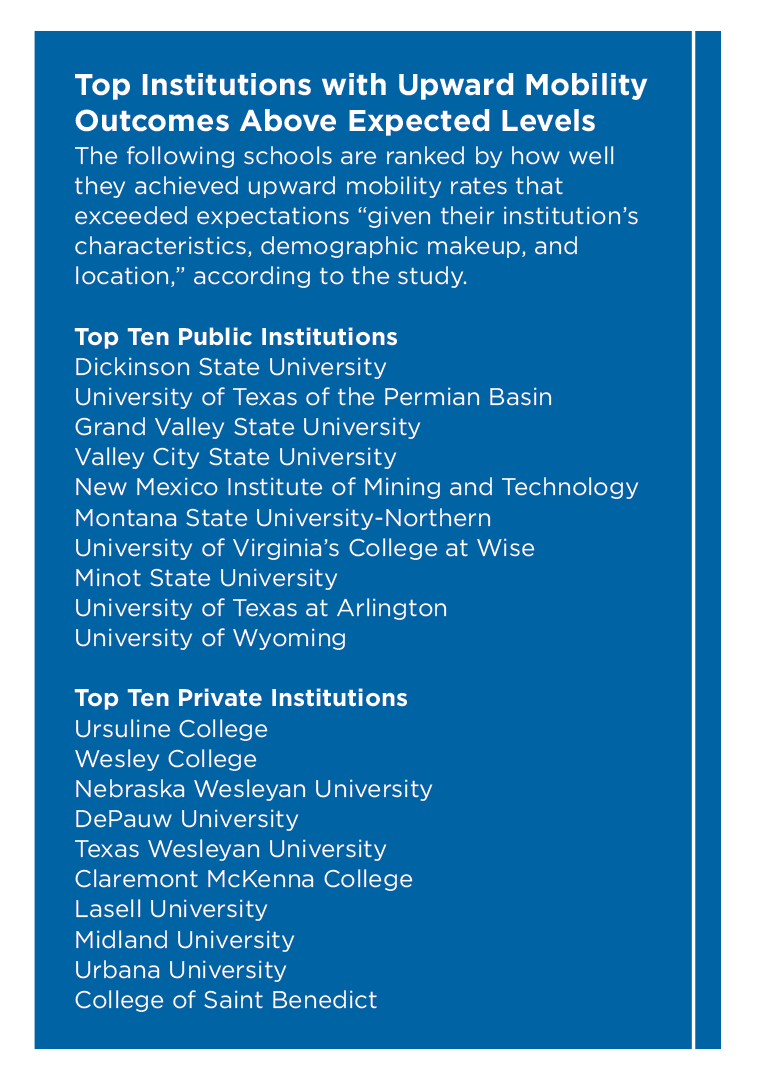 Despite this evidence that postsecondary education does in fact improve social mobility for some individuals, Alva and Christensen also found that economic status declined or remained stagnant for others. Approximately 27 percent of those from families in the lowest two income brackets “remained stuck at the bottom of the income distribution,” the study states. Just over 35 percent of students in the study experienced downward mobility — a drop in economic status.— or remained stagnant.

Students from wealthier households were not immune to the effects of downward mobility after college. Nearly 18 percent of those from the highest income quintile fell to the lowest two quintiles of earnings after college.

The authors hypothesize that some of this downward mobility can be attributed to students choosing to pursue further educational opportunities, such as graduate school, that delay their earnings potential. Alva and Christensen also point to the large number of those who fail to finish a degree and the “external economic barriers that affect low-income students and millennials as a whole” for some of the decline or stagnation in economic status.

“The bottom line is that the failure to climb the financial ladder is not always the result of a poor education,” the study states.

Alva and Christensen ultimately conclude that there “is no single recipe to generating strong mobility outcomes.” Certain factors such as an institution’s graduation rates indicated that students were more likely to experience upward mobility. Yet some top-ranking universities in their study were not always guaranteed to produce better financial outcomes than less selective institutions, nor were a college’s demographics or even the amount of spending per student found to be totally reliable determinants for the likelihood that a low-income graduate would significantly rise in economic status.

The authors note that certain colleges and universities were able to “beat the odds” by “consistently mov[ing] students up the income ladder at levels that are far above what would be expected of them. These colleges are rarely state flagship universities or Ivy League institutions; instead, colleges that beat the odds by the largest margins are usually regional, comprehensive colleges.” These institutions were anomalies in achieving high mobility rates despite what other factors — such as academic preparation and selectivity — would indicate for their graduates.