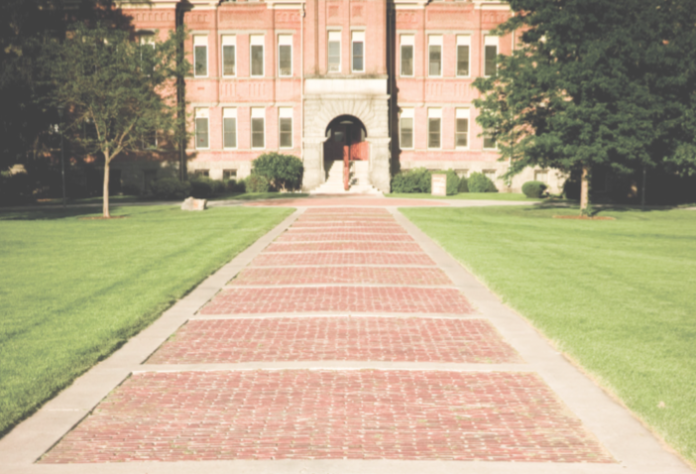 As COVID-19 cases continue to rise across the U.S., colleges and universities have devised a range of methods for keeping their campuses and surrounding communities safe during the upcoming spring semester. Some higher education institutions plan to continue the alternative academic models implemented in fall 2020, especially the popular hybrid class model. Others have revised traditional course schedules, imposed unique housing policies, and eliminated or reduced student breaks.

As with the fall 2020 semester, colleges are likely to make last minute changes before the spring semester gets underway, according to higher education experts. Others that already announced plans may find themselves forced to reverse course if students returning from winter break bring with them a wave of infections. And, as in the fall, there is the possibility that students will ignore social distancing guidelines by attending parties and other super spreader events once they arrive on campus.

Many have said they will cancel the traditional spring break vacation in the hopes of restricting student travel and to accommodate a condensed class schedule. A number of institutions have dispersed the five days traditionally allotted for a week’s break over the course of the semester instead. Others are limiting the break to as little as one day.

Some schools have issued explicit restrictions when it comes to travel. Yale University has allotted students five days free from classes over the course of the semester, but undergraduates are forbidden from leaving the state on their days off without special permission. 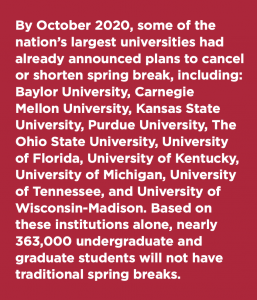 Many institutions hope to discourage students from traveling by encouraging them to consider their days off not as vacation time but as “reading days,” as in the case of the University of South Carolina, or simply “break days,” as Purdue University has labeled them. At American University (AU), spring break has been changed to “Wellness Week” to encourage students to use their free time to relax and practice self-care.

AU is also one of the many colleges throughout the U.S. that have transformed campus housing policies. Though the university’s residence halls will be closed during the first half of the semester, 1,250 students will be allowed to move into dorms during Wellness Week in March and stay through the end of the semester. Priority has been given to freshmen so that they can have some of the traditional college experience, albeit while staying in single rooms and practicing social distancing.

Another popular option for spring is to condense the semester by starting late and, in some cases, ending early. This is designed to limit the amount of time that campuses are open during colder months and the traditional flu season. It also provides for a longer window of time between holiday gatherings and the return to campus. Other colleges are beginning classes online according to a traditional schedule but opening campus at a later date.

Though the idea of late starts and canceled spring break is growing across higher education, there is no consensus on the exact timeline. Middlebury College in Vermont, for example, will not open campus until March 1, while others will delay only until the end of January, according to USA Today.

Some opted not to finalize their spring schedules until the end of winter break; others remain uncertain amid changes in local infection rates.

A recent analysis by The New York Times illustrates what could affect how colleges determine the benefits versus the risks of opening campuses.

The analysis, released on December 12, shows that COVID-19 deaths are higher in counties with large numbers of college students. The newspaper looked at 203 counties where students made up at least 10 percent of the population and found that death rates had more than doubled in these areas since the end of August. By comparison, the rest of the country experienced only a 58 percent increase in deaths over the same time period. Most of the deceased were older residents and community members, which suggests that young college students.— who are likely to experience no or mild symptoms if infected — were unknowingly transmitting the virus to vulnerable populations in surrounding communities. The Times noted that many students work in off-campus service and health care jobs, which could increase their exposure to the general public and the elderly or ill.

Furthermore, some college and university administrators are already under pressure from governmental leaders and public health officials to reverse plans to reopen campuses, even if intending to use a hybrid course model or impose other restrictions. On December 16, Pennsylvania Acting Secretary of Education Noe Ortega urged institutions in his state to delay the start of the semester due to a significant increase in coronavirus cases and “another surge expected to peak in January,” according to The Pittsburgh Tribune-Review.

“We are seeing an alarming increase in COVID-19 cases and hospitalizations, and these trends are expected to worsen in January at the time when students normally return to campus,” Ortega said in a statement. “By delaying students’ return to campus, our institutions of higher learning can help slow the spread of the virus, help businesses to remain open, and protect regional health care systems.”●

Erik Cliburn is a senior staff writer for and Mariah Bohanon is the senior editor of INSIGHT Into Diversity. 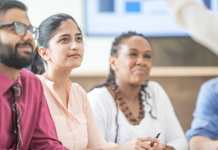