College students across the country began to amass late Tuesday night following the announcement of Donald Trump’s victory over Hillary Clinton to protest the election results. Taking to the streets, many expressed their outrage with shouts of “Not my president!” and “No more Trump!”

Officials said that between 1,500 and 3,000 students marched across UCLA’s campus, with some heard shouting explicit slurs directed at Trump. It was also reported that someone had defaced city property; however, no arrests were made.

Furthermore, in San Francisco, a 20-year-old student was injured after being hit by a car as protestors attempted to block the highway and ignited several trashcan fires.

Student protestors also marched in Portland, Ore.; Washington, D.C.; and Pittsburg, where some University of Pittsburgh students called for unity, according to the Associated Press. 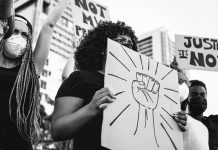 Protests Spread Across Country, On Campuses After Police Shootings of Black Men