According to an analysis conducted by Bloomberg media company, Maryland ranks as the most gender-equal state in the nation.

After Maryland, Vermont is the second-most gender-equal state, followed by Minnesota, Connecticut, and Hawaii. The states with the least gender equality are Oklahoma, Mississippi, and Louisiana.

“Women tend to do well where the industries that dominate that state are white-collar industries, whether it’s insurance, or healthcare, or education, or government,” said Heidi Hartmann, president of the Institute for Women’s Policy Research in Washington. She continued by saying that Maryland benefits from being geographically close to “not only this federal government here, but three state government capitals very nearby.”

“In general, educated women are attracted to big cities, and particularly where there is a strong public sector, because women can advance more equally in the public sector,” Hartmann said.

In Maryland, women claimed a third of the six-figure paychecks, and behind Massachusetts, it had the second-highest number of women with advanced degrees. Washington state ranked second in the overall leadership index, which, according to the report, has the most women-friendly legislature.

Hartmann said that women in politics could help draw attention to issues such as paid family leave, affordable childcare, and equal pay.

A report by Peterson Institute for International Economics and Ernst & Young found that companies with at least 30 percent women in senior leadership positions would likely boost a company’s net profit by an estimated 15 percent. Hartmann offers suggestions on how women can take on more leadership roles in firms. 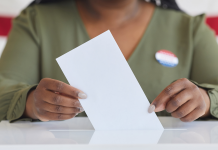 100 Years After the 19th Amendment, Women Dominate at the Polls