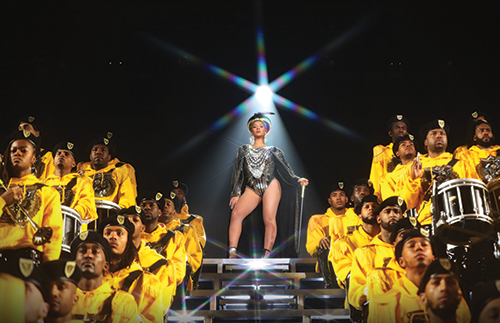 Earlier this year, Netflix released a documentary of Beyoncé’s performance at the Coachella Valley Music and Arts Festival, held annually in Indio, Calif. Approximately one year before, the pop icon was the first African American woman to headline the affair. She marked the occasion by paying tribute to historically Black colleges and universities (HBCUs), assembling a group of more than 150 former HBCU band members and dancers who embellished her hit songs with drum lines, step-dancing, and other signature moves of Black college culture.

Shortly after the performance, she established the Homecoming Scholars Award Program, which donated $25,000 to one student each at four different HBCUs for the duration of the 2018-2019 school year: Xavier University, Wilberforce University, Tuskegee University, and Bethune-Cookman University.

The Netflix film mixes rehearsal footage with that of the actual performance, punctuated by inspirational quotes from famous HBCU graduates. It shows Beyoncé telling a group of young dancers that she “had always dreamed of going to an HBCU” before her life took a different direction with the band Destiny’s Child. Of the young Black artists assembled for the performance, she said, “The amount of swag is just limitless.”