Nineteen attorneys general and the University of California have filed three separate lawsuits against President Donald Trump for his decision last week to rescind the Deferred Action for Childhood Arrivals (DACA) program.

DACA allows undocumented immigrants who were brought to the U.S. as children to remain in the country without fear of deportation. While the program does not provide a path to citizenship for these individuals — who are commonly referred to as DREAMers — the Trump administration has claimed that DACA defies federal immigration law and that President Barack Obama violated the Constitution when he enacted it in 2012. Trump announced on September 5 that Congress has six months to work to revise the program before it will be terminated.

Approximately a quarter of the country’s 800,000 DREAMers live in California. Of those, roughly 4,000 are enrolled in the University of California (UC) System. Janet Napolitano, president of the UC System, is credited with leading the development of DACA as head of the U.S. Department of Homeland Security under Obama. She initiated UC’s lawsuit against Trump, which claims that the rescission of DACA harms both DREAMer students and the university system as a whole. It also claims that Trump’s decision violates the Administrative Procedure Act, which requires that the viewpoints of populations affected by a government policy be taken into account before such a policy can be revoked. UC’s lawsuit was filed on September 8.

Additionally, California Attorney General Xavier Becerra filed suit against the president on September 11. He claims that the termination of DACA violates the privacy rights of DREAMers, who are required to provide personal information to the government when they apply for the program. The suit also states that ending DACA would harm individual states’ economies, particularly in California where DREAMers make up a large portion of the workforce and significantly contribute to tax revenues. Maine, Maryland, and Minnesota have joined Becerra’s suit.

New York Attorney General Eric Schneiderman was the first to take legal action in defense of DACA when he filed suit on September 6 — one day after Trump’s announcement. In total, 14 states and Washington, D.C., have signed that lawsuit, which accuses the president of violating due process and issuing an executive order based on racial bias. Schneiderman cites statements Trump made during the presidential campaign, such as calling Mexican immigrants criminals and “bad hombres,” as evidence of this bias.

U.S. Attorney General Jeff Sessions responded to the suits by reaffirming the president’s claims that DACA violates federal immigration law and that Obama overstepped his authority by issuing such an executive order. 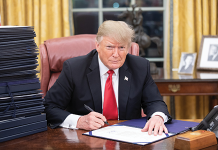