One of the ways that colleges and universities demonstrate their commitment to diversity and inclusion is by incorporating that commitment into their institutional strategic plans and by providing leadership at the senior level of administration. On many campuses, a chief diversity officer (CDO) is appointed to provide strategic leadership for diversity and inclusion efforts. Likewise, when many campuses seek to demonstrate their commitment to internationalization, they appoint a senior international officer (SIO). At Case Western Reserve University (CWRU), both of these positions were called for in the university’s 2008 five-year strategic plan, titled “Forward Thinking,” and both inaugural appointments were made in 2009.

Now, several years later, under the auspices of the new strategic plan, “Think Beyond the Possible” (2013-2018), both diversity and internationalization are identified from the previous plan as signature priorities that remain critical components of the university’s vision and mission for the next five years. Moreover, the CDO and the SIO have developed strategic plans for their respective offices that iterate their interconnectedness in the university’s priorities and include partnering on various intellectual and programmatic initiatives, as well as developing new ways to collaborate.

Both the CDO and the SIO have sought intentional ways to be inclusive in shaping their agendas. Although the CDO was hired before the SIO, acknowledging that diversity must be viewed from both a local and global perspective has been essential to how the CDO thinks and publicly articulates the work of the Office for Inclusion, Diversity, and Equal Opportunity. Both domestic students of color and international students can feel underrepresented or marginalized on campus, and each group can feel resentful of the other. It is therefore vital to have a CDO and an SIO who are vocal about the wishes, desires, and goals of both groups and who help create opportunities for students of color and international students to express their ideas and interests in their own words.

At CWRU, we encourage all students, including students of color and international students, to seek opportunities to study abroad, as well as participate in curricular and co-curricular programs that enhance their knowledge and understanding of the United States and other nations around the world. An opportunity presented by the Congressional Black Caucus Foundation (CBCF) illustrates how we encourage study abroad for students of color.

Given the tremendous amount of responsibility placed on both leaders, the only way such collaborations work is if both people are intentional, strategic, persistent, and innovative in their thinking.

Two weeks before the application deadline, the CWRU Office of Education Abroad received notice that the CBCF was providing two fully paid internships to qualified students to study in China for two weeks. Our study abroad advisers quickly got the word out, identified several qualified students, and worked with them to ensure their applications were completed and submitted on time. Both students ended up receiving the scholarship, and they described their time in China as “transformational.” Based on research on students who study abroad, these students’ time in China is likely to have a significant impact on their future, including their career opportunities.

We see the university’s global and cultural diversity requirement as just one of the ways to enhance students’ knowledge and understanding about the United States and other nations. Though faculty and students often challenge some of the course offerings included in this requirement, it represents one way the university has attempted to align the curriculum with its vision and values, especially at the undergraduate level. For example, while some students may fulfill the requirement by taking a course about a nation other than the U.S., others will fulfill it with a course that focuses on U.S. diversity.

Some members of the campus community believe the alignment of courses to be uneven because of the variations in how students fulfill the requirement. In addition, because the category represents a contested space in the undergraduate curriculum, the body of courses that make up such institutional requirements will undoubtedly benefit from review and assessment. Both the CDO and the SIO can contribute to such reviews by consulting with the faculty and institutional research professionals.

After the SIO was appointed in 2009, he formed a planning committee, on which he included the CDO. The CDO not only brought additional diversity to the committee, but in discussions about the direction the new office should take, she also provided insights from her work in international affairs. Likewise, the SIO serves on the Diversity Leadership Council. This kind of cross-fertilization is critical to learning how the work of the two offices is interconnected and to discovering new opportunities for sharing resources and collaborating. Given the tremendous amount of responsibility placed on both leaders, the only way such collaborations work is if both people are intentional, strategic, persistent, and innovative in their thinking.

Both leaders have taken turns developing ways to partner on intellectual and programmatic initiatives. They frequently exchange information of interest about relevant conferences both in the U.S. and overseas, include each other in lectures by guest scholars from other institutions, and invite their staff to meet with consultants on issues of interest to both offices. The CDO and the SIO have both expanded their programmatic initiatives to more intentionally include community members in the city of Cleveland, which is critical in two ways. First, it is important that students of color and international students think beyond the borders of the campus and build connections with members of their respective groups in the city and its surrounding communities. Second, connections such as those with the Cleveland Municipal School District and Global Cleveland — a local nonprofit — provide opportunities for mentoring, networking, and leveraging resources so that the community gains greater knowledge about the university as a resource for the economic development of the city.

Recently, the two leaders collaborated as campus hosts for a webinar on partnerships between CDOs and SIOs, sponsored by the National Association for Diversity Officers in Higher Education (NADOHE) and the Association of International Education Administrators (AIEA). By sharing the cost of hosting the seminar and providing open access to the campus community, they not only encouraged faculty, students, and staff to “think beyond the possible” — the CWRU tagline — and to begin considering how their work is interconnected, but they also provided evidence on how such collaborations benefit the university. Building on their expertise and experiences, the CDO and a former NADOHE board member presented on the same topic at AIEA’s annual meeting. Nearly all of the attendees at this session believed both organizations need to continue to host discussions about structural and institutional barriers to greater collaborations.

Perhaps structural and institutional barriers present the greatest challenge on most campuses. CDOs and SIOs are similar to other campus administrators, such as vice presidents, deans, and even department chairs. It may be easier to remain in the silos of our particular identities, but breaking out of those has its benefits. For example, the Office for Inclusion, Diversity, and Equal Opportunity has begun incorporating a session on intercultural communication and cross-cultural competency into its award-winning Train the Champion full-day opening session. Including one of the professionals from the Center for International Affairs (CIA) created an excellent opportunity for participants to better understand how the CDO and the SIO collaborate on campus. It also allowed students to learn from CIA staff some of the overlapping concerns of U.S. students of color and international students around stereotyping, implicit and unconscious bias, and the need for greater cultural humility and empathy.

In light of how volatile the nation and the world have become regarding cultural differences, we will need to build on these collaborations and continue to be a resource to our faculty, students, staff, and alumni. From our unique perspectives as the chief diversity and senior international officers, we bring diverse ways of knowing, learning, and thinking that will serve our campus, our community, our nation, and our world. We believe educating engaged, global citizens is an honor and a privilege that must continue to be taken seriously, as there is much at stake.●

Marilyn S. Mobley, PhD, is the vice president for inclusion, diversity, and equal opportunity and professor of English at Case Western Reserve University (CWRU). David Fleshler, JD, is the associate provost for international affairs at CWRU. CWRU is an INSIGHT Into Diversity HEED Award recipient. 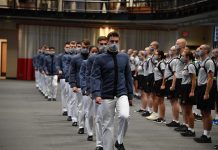